With her face adorning urinals and dripping blood in protest portraits, there can be little doubt that South Korea’s most unpopular person is currently President Park Geun-hye.

For the fifth weekend running, crowds estimated from 500,000 to 1.5 million have thronged central Seoul to demand her ouster. On Saturday, hundreds of provincial farmers, many driving tractors, joined a demonstration that paralyzed the capital, shutting down streets spanning out from palatial Gwanghwamun Square. As they gathered, performance artists and traditional Yonggo drummers competed for attention beneath a seated golden statue of 15th century King Sejong.

Excited crowds held candles aloft. Looking on were squads of riot police, almost exclusively drawn from the 19- to 39-year-old age group among whom Park’s approval rating polls have sunk to a politically unprecedented 0%. (Owing to residual support among diehard conservatives, her approval rating across all ages stands at a paltry 4%.)

“We cannot wait even one day [for her to quit],” protester Cho Mi-sun, a 51-year-old teacher, tells TIME. “She’s not normal and too dangerous to rule this country.”

Park, the daughter of the late former President and military dictator Park Chung-hee, was elected in late 2012 on electoral promises to rein in the chaebol — the massive South Korean conglomerates that dominate the economy and exert a major influence on politics. But prosecutors accuse her of actually boosting their clout through her longtime confidante, Choi Soon-sil.

‘Everything is wrong with Korea’

Choi’s father was Choi Tae-min, the founder of a religious cult, who died in 1994. He was close to Park and her father, and claimed that he could receive messages from Park’s mother — killed by an assassin’s bullet meant for the dictator — from beyond the grave. Confidential U.S. cables obtained by WikiLeaks describe Choi as having a Rasputin-like power over the First Family.

According to prosecutors, Park regularly shared classified documents with the younger Choi, allowing her to tweak speeches and inform national policy. Choi was indicted on Nov. 20, accused of using her influence and access to squeeze more than $70 million from the chaebol, including such global names as Hyundai, LG and Samsung. Investigators raided the offices of Samsung after accusations that a controversial merger was approved by the government in return for a “donation” to one of Choi’s foundations, as well as to an equestrian school where her daughter, a dressage champion, trained.

Yet to focus on a cultish hand in the presidential drama is to overlook some very real-world grievances. What began as a protest against alleged corruption at the highest level has morphed into a general indictment of the ills of Korean society. In a survey of 21,000 Koreans last year, 88% of respondents admitted considering emigrating to another country because of a sluggish economy, distrust in the government and a lack of social mobility. While South Korea is commonly seen as an economic marvel, and by some metrics remains Asia’s most developed nation, it also copes with income inequality and soaring living costs. National household debt has hit a record $1.1 trillion, meaning the population is extremely vulnerable to rising interest rates and other headwinds. For many Koreans, economic dissatisfaction is exacerbated by country’s conservative social codes and notorious sexism.

“Everything is wrong with Korea,” says protesting train driver, Kim Seon-uk, 39, huddled in the tent in central Seoul he’s pitched every day for the past month. “Park needs to quit now.”

Prosecutors accuse Park of being Choi’s accomplice, though the President is protected from criminal indictment by the constitution, unless for insurrection or treason. Besides Choi, two former Park aides have been charged with various charges relating to abuse of power, fraud and coercion and leaking classified documents. Impeachment proceedings against Park are slated for early next month.

The fallout could have serious consequences for regional if not global stability. South Korea is arguably the most important U.S. ally in East Asia. The constitution of Washington’s other major ally, Japan, largely precludes it from taking an active role in security matters. Thus the relationship between Washington and Seoul is of crucial importance if the simmering antagonism of North Korea, an aspirational nuclear power, is to be contained — a fact underscored by the presence of 28,500 American troops in South Korea.

“The question for South Korea going forward is how credible will the commitment from [U.S. President-elect Donald] Trump be when he’s Commander in Chief,” Professor Sean O’Malley, a political scientist at South Korea’s Dongseo University, tells TIME.

Park has been especially hawkish on North Korea following Pyongyang’s fourth nuclear test, agreeing to the deployment of U.S. THAAD missile batteries much to the annoyance of North Korea’s only real ally, China. That could change with her ouster. Alarmed by Trump’s threats to force allies to pay the full costs of their own defense — Seoul paid $866 million, or about 40% of the total, in 2014 — some in South Korea’s opposition are already saying that rapprochement with Beijing makes more sense. Trump’s talk of raising import levies — half of South Korea’s GDP comes from exports — only adds to the feeling that Washington isn’t to be relied upon.

In the meantime, the protests against Park continue to build. The demonstrators are a cross-section of Korean society: there are trade unionists, students, representatives of parties of the left and right, feminist groups and families. (A particularly poignant contingent is formed by the relatives of the 304 people, mostly high school children, who lost their lives in the entirely preventable 2014 Sewol ferry disaster — itself seen as another symptom of the country’s malaise.)

Young faces, and female ones, are prominent in the crowd. South Korea boasts one of the world’s toughest education systems, contributing in no small part to the world’s highest teen-suicide rate, as young people struggle to get into one of the top three universities. And yet education is no guarantee of a job. Youth unemployment stands at a record high of 9.4%.

“People increasingly see the entire game is rigged, and the only people who get ahead have significant social and economic capital,” says Professor Michael Hurt, a culture specialist at Hankuk University of Foreign Studies in Seoul.

The game is especially rigged against women. South Korea ranks 115 out of 145 nations on the 2015 World Economic Forum Global Gender Gap Report. In terms of educational attainment, it places even lower than Saudi Arabia. Park maybe the nation’s first female President but she has always been more a dynastic scion than trailblazing feminist. Her presidential campaign capitalized on the support of older conservatives, who still venerate her father for spearheading the nation’s miraculous transformation into a world-leading economy in the 1960s and ’70s, despite his trampling of human rights.

Violence and discrimination against women have actually increased during her term, and women find the glass ceiling lower and tougher to crack. While political protests in South Korea have historically been orchestrated by men, the current demonstrations have seen women taking a leading role. That Park has done little to soften Korea’s patriarchal culture only heightens a sense of betrayal.

“[Park] spoiled it for us,” says 17-year-old high school student Kang Hee-soo, scrawling a scornful message to Park on a protest wall in central Seoul. “Many people now say, ‘Look at her, that’s all a woman can do.’”

‘She deserves to be impeached’

Despite the protests and plummeting polls, Park has steadfastly refused to resign, instead ensconcing herself in the presidential Blue House, where she grew up. Impeachment is gathering pace: the process requires more than two-thirds of the 300-seat national assembly, meaning at least 29 lawmakers from Park’s Saenuri Party would need to join the 171 opposition legislators. Forty have already promised to do so.

“President Park betrayed the people and the Saenuri Party and gravely violated the constitution,” Kim Moo-sung, former party chairman, told local media on Nov. 23. “She deserves to be impeached.”

Constitutionally, the Prime Minister would take over in that case. However, Park fired Hwang Kyo-ahn from the post in early November, and her nominated replacement has not been ratified by the National Assembly, leaving the possibility of a damaging power vacuum. Despite the antipathy to Park, the main opposition Democratic Party only polls an approval rating of 31%, with Park’s ruling Saenuri Party at 15% and the splinter People’s Party at 14%.

“The opposition haven’t played the very strong hand they have been dealt,” says Dongseo University’s O’Malley. “Their vision and policies have not been well articulated.”

One possibility to succeed Park is Ban Ki-moon, who ends his term as U.N. Secretary-General next month, though he is generally perceived as a political lightweight. Another choice is Seoul’s popular mayor, Park Won-soon (no relation to the President), a former left-wing activist, who would wield the backing of a large proportion of the capital’s residents.

But the opposition is dawdling, largely to better prepare for presidential elections slated for next autumn. For protesters, that is intolerably long to wait.

“There’s no appetite among the public for any type of political strategizing,” says Christopher Green, a Korea expert at Leiden University in the Netherlands. “They just want to see the back of Park Geun-hye.” 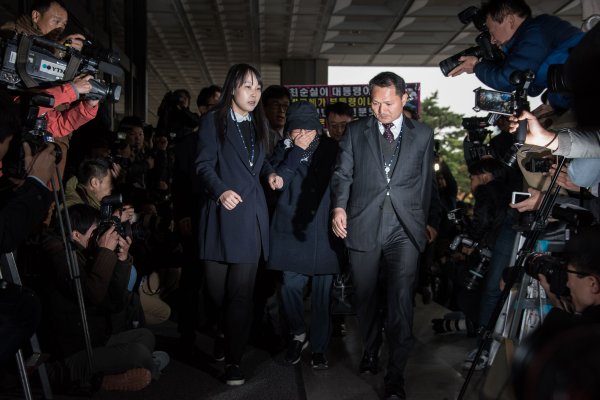