World leaders on Saturday reacted to the death of former Cuban leader Fidel Castro, even as many Cuban-Americans in Miami celebrated the news in the streets of Little Havana.

His death was announced late Friday by his brother, Cuban President Raúl Castro.

“At this time of Fidel Castro’s passing, we extend a hand of friendship to the Cuban people,” President Barack Obama said in a statement Saturday, offering condolences to his family. “We know that this moment fills Cubans—in Cuba and in the United States—with powerful emotions, recalling the countless ways in which Fidel Castro altered the course of individual lives, families, and of the Cuban nation. History will record and judge the enormous impact of this singular figure on the people and world around him.”

Obama acknowledged that Cuba and the U.S. had endured decades of “discord and profound political disagreements,” but he said he hopes his efforts to repair that relationship will move forward in the future.

In an official statement, he later added more.

“Today, the world marks the passing of a brutal dictator who oppressed his own people for nearly six decades. Fidel Castro’s legacy is one of firing squads, theft, unimaginable suffering, poverty and the denial of fundamental human rights,” Trump said in the statement. “Though the tragedies, deaths and pain caused by Fidel Castro cannot be erased, our administration will do all it can to ensure the Cuban people can finally begin their journey toward prosperity and liberty.”

Russian President Vladimir Putin sent a telegram to Raúl Castro in which he called Fidel Castro “a sincere and reliable friend of Russia,” according to the Associated Press.

“Free and independent Cuba, which he (Fidel Castro) and his allies built, became an influential member of the international community and became an inspiring example for many countries and nations,” Putin said.

Mexican President Enrique Peña Nieto said on Twitter: “Fidel Castro was a friend of Mexico, promoting bilateral relations based on respect, dialogue and solidarity,” according to an AP translation.

“Fidel Castro was one of the most iconic personalities of the 20th century. India mourns the loss of a great friend,” Indian Prime Minister Narendra Modi said on Twitter. “I extend my deepest condolences to the Government & people of Cuba on the sad demise of Fidel Castro. May his soul rest in peace.”

Pope Francis sent a telegram to Raúl Castro offering “my sense of grief to your excellency and family” and signed it himself, the AP reported.

“Fidel Castro was a larger than life leader who served his people for almost half a century,” Canadian Prime Minister Justin Trudeau said in a statement, calling him a “legendary revolutionary and orator.” “While a controversial figure, both Mr. Castro’s supporters and detractors recognized his tremendous dedication and love for the Cuban people who had a deep and lasting affection for ‘el Comandante.'”

In a message read on state broadcaster CCTV, Chinese President Xi Jinping praised Fidel Castro’s “immortal historical contributions to the development of socialism around the world,” the AP reported.

“With his death, the Chinese people have lost a close comrade and a sincere friend. His glorious image and great achievements will be recorded in history forever,” Jinping said.

U.K. Labour leader Jeremy Corbyn called Fidel Castro a “huge figure in our lives,” according to the BBC.

“For all his flaws, Castro’s support for Angola played a crucial role in bringing an end to apartheid in South Africa and he will be remembered both as an internationalist and a champion of social justice,” Corbyn said.

“Although responsible for indefensible human rights and free-speech abuses, Castro created a society of unparalleled access to free health, education and equal opportunity despite an economically throttling USA siege,” Hain said, according to CBS News. “His troops inflicted the first defeat on South Africa’s troops in Angola in 1988, a vital turning point in the struggle against apartheid.”

Foreign Secretary Boris Johnson called him a “historic, if controversial figure,” the BBC reported. He said Fidel Castro’s death marked “the end of an era for Cuba and the start of a new one for Cuba’s people.”

“Comandante Fidel Castro has passed into immortality,” Venezuelan President Nicolás Maduro said on broadcaster Telesur, according to Reuters. “It’s a big blow for all the world’s revolutionaries. Our thoughts go out to the noble people of Cuba, heroic, courageous.” 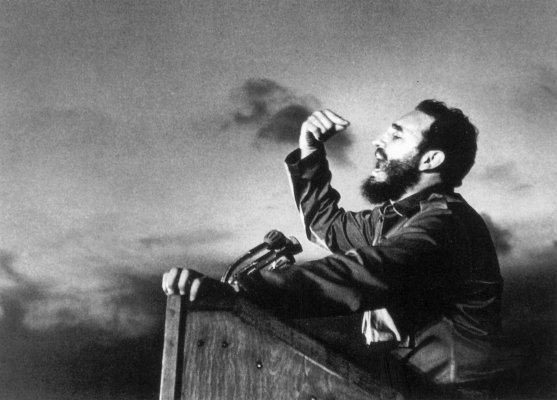 Fidel Castro: A Life in Pictures
Next Up: Editor's Pick