President Barack Obama’s final Thanksgiving message focused on the theme of coming together as he wished a happy holiday to the nation.

In Obama’s last Thanksgiving address as President, he encouraged viewers to “reflect on what truly binds us as Americans” as he referred to the country’s founding values and the vision of Abraham Lincoln. “As a country, we’ve just emerged from a noisy, passionate and sometimes divisive campaign season,” the President said. “Thanksgiving reminds us that no matter our differences, we’re still one people—part of something bigger than ourselves.”

The President’s message was of a similar nature to that of President-elect Donald Trump, who posted his own Thanksgiving message via social media. Referring to the contributions of all to American society, Obama said “We honor all people from the first Americans to our newest arrivals who continue to shape our nation’s story, enrich our heritage, and give meaning to our founding values…as long as we stand up for each other, speak up for what is right and stay true to these ideals, then no one can ever take away our liberty.” 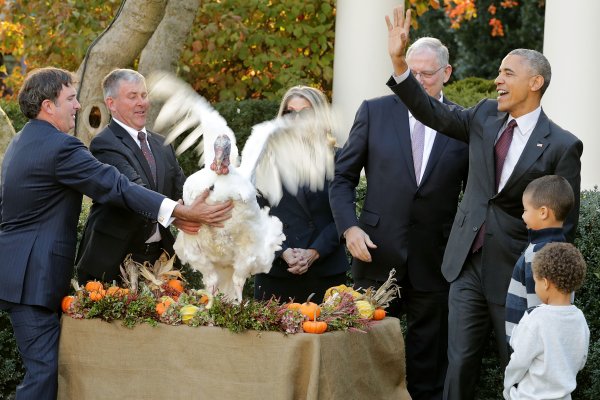 Read President Obama's Final 'Dad Jokes About Turkeys' From the Thanksgiving Pardon
Next Up: Editor's Pick