South Carolina Gov. Nikki Haley will accept the nomination to the post of U.S. Ambassador to the United Nations from President-elect Donald Trump, according to two sources familiar with Trump’s presidential transition.

Haley, the popular governor whose national stock rose after leading the response to the Charleston church shooting last year, is the first woman and the first Indian-American tapped by Trump for an administration post, and his first departure outside his inner circle of advisors. An official announcement is expected later Wednesday.

Haley, 44, is midway through her second term as governor, where her state has seen widespread economic growth under her tenure. But her lack of traditional foreign policy experience is likely to draw scrutiny during Senate confirmation hearings. Haley is close with former Massachusetts Gov. Mitt Romney, one of the leading contenders to be Trump’s Secretary of State.

Haley endorsed Florida Sen. Marco Rubio and then Texas Sen. Ted Cruz during the contentious Republican primaries, and was a frequent critic of Trump’s rhetoric. She reluctantly announced her intent to vote for Trump just two weeks before Election Day, telling reporters, “This is no longer a choice for me on personalities because I’m not a fan of either one, what it is about is policy.”

According to a transition source, Haley’s post will be of Cabinet-rank, a departure from the past two Republican administrations in which it was a sub-Cabinet-level post. Haley’s nomination must be confirmed by the Senate. 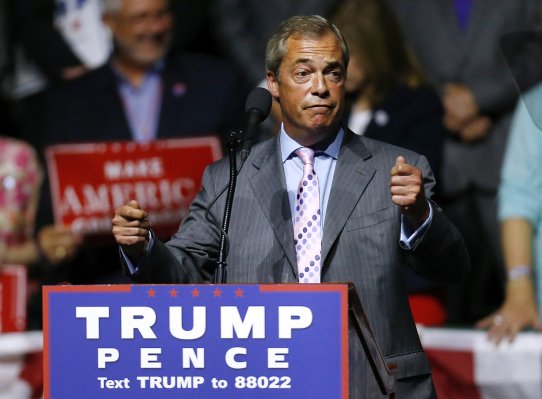 Donald Trump Says 'Many' Want Nigel Farage as Ambassador
Next Up: Editor's Pick