The feud between President-elect Donald Trump and Hamilton inspired a hip-hop musical on The Late Show on Monday night.

The soon-to-be president’s spat with Hamilton started when the cast addressed Vice President-elect Mike Pence when he attended the show last Friday. Trump took to Twitter on Saturday to demand an apology from the cast of the hit Broadway musical, saying the theater should be a safe space.

“First of all, Mr. Trump, the only president who gets to complain about the theater is Lincoln,” said Stephen Colbert. Colbert noted that the online feud between the cast of a Broadway show and a president-elect would go down in the history books with Colbert doing his part to ensure it. “Future generations of Americans will learn all about in the form of a hip-hop musical,” he said, before donning a hat and wig.

“I always thought the theater was a safe and special place,” sang Colbert as Trump. “But when the vice president’s in residence some thugs get in his face.”

He continued: “The cast casting aspersions before Pence can hit ’em back with some gay conversions,” rapped Colbert. “He got a lecture, got hectored in his tiny little seat, I won’t let my Veep go down like that. Men, to the tweets!” Watch the full musical in the video above. 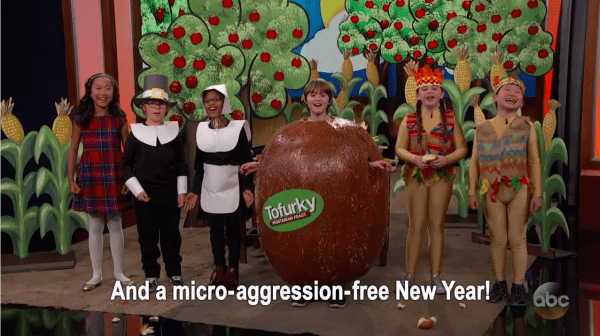 Jimmy Kimmel Had Kids Make A Politically Correct Thanksgiving
Next Up: Editor's Pick