This week sees the release of Disney’s highly-anticipated Moana, a new princess film based loosely on Polynesian mythology. It’s one of the few Disney princess films highlighting women of color, joining the ranks of Mulan and The Princess and the Frog. And while critics have been buzzing about the all-star cast, which includes Dwayne Johnson as demigod Maui and Hamilton alum Lin-Manuel Miranda as a songwriter, the real shining star of the film is newcomer Auli’i Cravalho, who voices Moana herself.

Cravalho, who is a high school junior from Hawaii and just turned 16 this week, was scooped up for the film after Disney saw her audition tape for a local charity’s showcase. “It so blows my mind,” she told Motto about playing Moana. “It gives me goosebumps and chicken skin when I think about it.”

Cravalho is also thrilled to bring a Polynesian story to the screen. “People just really don’t know much about our culture. We’re definitely a minority and so I’m really excited for everyone to see it,” she said. But she insists that this isn’t a film just for children or for people with her heritage. “It can really be loved by everyone.”

Motto spoke with Cravalho about her role in the film, her journey to self-discovery and what we can learn from Moana:

MOTTO: A huge talking point about the movie is that Moana does not have a love interest and the story does not revolve around romance. Why do you think that is important for people to see?
Auli’i Cravalho: Coming from a personal point, I’m kind of going on this journey. Moana also goes on a journey. Yes, a physical one across miles and miles of ocean to save her people. But she also goes on a very personal and emotional journey as well of figuring out who she is. She leaves this place that she loved so much to define herself. And she doesn’t need a love interest to do that. No one needs a love interest to figure out who they are. That message of taking that time to find yourself is something that everyone can take something from.

A lot of girls (and boys) are going to look up to Moana as a role model. What can they learn from her?
Something that I’ve learned from her is understanding where you came from. That will always be with you. But as long as you remember that and you keep it close to your heart and you keep your roots no matter where you go, you’re still going to be who you are.

I thought of that because I love this industry and I love where it’s taking me, but I wasn’t sure how I could be a Polynesian wherever I would go. I don’t necessarily look Polynesian — I really don’t, I understand that and people have told me that before. But it’s not about what we look like, it’s not about what others say. I am who I am. No matter where I go, I’m going to take that with me.

You’ve said that this role has helped you find your path. What do you think that is?
I think I still haven’t found myself which is something that kind of scared me at first. The way I really figured out what I wanted to do was to stop thinking about it. Because I feel like every part of a high schooler’s life is thinking of the direction that you want to stop at. And I never want to think of myself stopping. So once I took away that mindset, I figured out that this is the direction I want to go in, and I want to continue in that direction as far and as long as I can. Hopefully I’ll be doing more in film and singing. Before this, all I had was backyard plays with my mom. So I’m really excited for this direction I’m going in. And of course college. That isn’t even a talkable topic in my family! 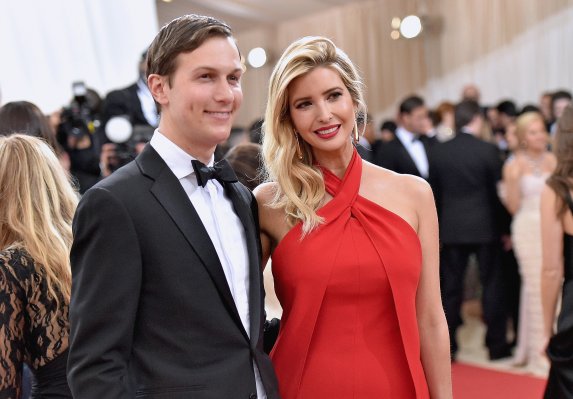 Ivanka Trump: Donald and Jared Kushner Bonded Over 'Me and Real Estate'
Next Up: Editor's Pick