Why the Last Four Words of Gilmore Girls Will Matter

When Gilmore Girls: A Year in the Life premieres on Netflix this Friday, some fans will inevitably skip to the end of the final episode. This act is not one inspired by some sort of When Harry Met Sally nihilism. Rather, they want to be the first to know—and share on social media—the last four words of the series, which have become the cornerstone of Gilmore lore.

The show’s creator, Amy Sherman-Palladino has had these words simmering in her mind for a decade. She had a reputation for plotting out every single aspect of the show, including the final words spoken on the series—words that were never uttered. Controversially, she and the WB parted ways a year before Gilmore Girls ended in 2007. Fans, critics and even the show’s stars consider the seventh and final season lacking, even beyond the missing final words.

For many fans those four words have come to represent an alternate reality where Sherman-Palladino stayed with the show and wrote a better, more satisfying ending. (This dreamy “what if?” scenario neglects that many show endings tend to be weaker than their beginnings or middles.) They’ve gained mythical status, thanks in part to their mystery: Sherman-Palladino has not even confirmed who utters the final words, though many fans have assumed either Lorelai Gilmore (Lauren Graham) or her daughter Rory (Alexis Bledel) will do the honors.

After nine years of stewing over what could have been, many fans anticipate that A Year in the Life will be sort of a do-over. Sure, they can’t rewind time, throw a now 32-year-old Rory back into Yale and re-write her senior year. But they can rewrite the ending to these characters’ onscreen lives. This may be misguided: Sherman-Palladino told TIME that the new 90-minute installments are not just more episodes of Gilmore Girls. They endeavor to be deeper, darker and different.

Still, fans will look to the new series for closure, hence the urge to discover those last four words. The creator is so worried about spoilers that she says they filmed several different endings to make sure the words didn’t leak. She also unsuccessfully lobbied Netflix to release the episodes piecemeal instead of all at once.

No such luck. Fans will either be celebrating or fuming on Friday night (or, rather, in the wee hours of Saturday morning) when they hear the words meant to end the series, the words which they’ve awaited for nine years. 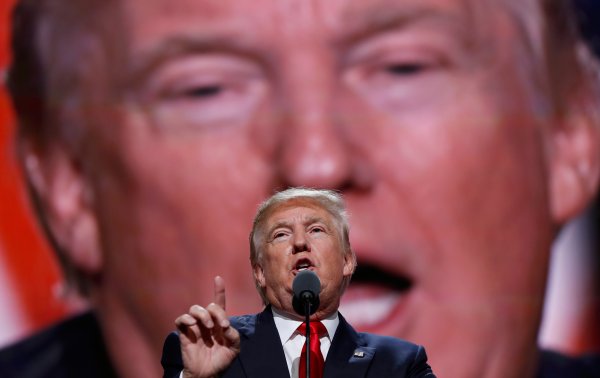 How Artists Are Changing Their Work in Response to Donald Trump’s Victory
Next Up: Editor's Pick