This Was the First Rockefeller Center Christmas Tree

Construction workers line up for pay beside the first Rockefeller Center Christmas tree in New York in 1931. St. Patrick's Cathedral is visible in the background on Fifth Avenue.
AP Photo
By Olivia B. Waxman

The 2016 Rockefeller Center Christmas Tree, New York City’s most famous festive flora, will be lit on Wednesday night and will remain lit until Jan. 7, 2017. This 94-ft.-tall Norway spruce will be decked out with five miles of multi-colored LED lights and be topped with a Swarovski star made of 25,000 crystals.

Needless to say, it is much more elaborately decorated than the first Christmas tree at the complex. Erected on Christmas Eve in 1931 by the construction workers who were building Rockefeller Center, it was a 20-ft.-tall balsam decorated with strings of cranberries, garlands of paper and tin cans. In the above photo, a foreman is standing on a wooden crate and passing out holiday checks and bonuses to laborers wearing overalls and boots coated in dust.

That year’s holiday wasn’t a very merry Christmas, as the country was in the middle of the Great Depression. With unemployment in New York said to be over 20%, and unemployment in construction industry as high as 60% by some counts, this job provided hope.

“[Rockefeller Center] became the largest new private employer in the city and put tens of thousands of people in various capacities back to work during the years of its construction,” says Daniel Okrent, author of Great Fortune: The Epic of Rockefeller Center and a former LIFE magazine managing editor. “It was also the single largest and most expensive private development in the history of the world at the time.” 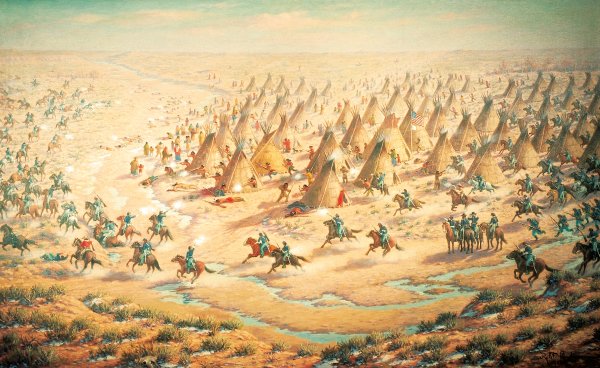 The Sand Creek Massacre Took Place More Than 150 Years Ago. It Still Matters
Next Up: Editor's Pick