The Debate Over Japanese Internment Is Deeply Flawed

Ideas
By Kermit Roosevelt
Roosevelt is a professor of constitutional law at the University of Pennsylvania Carey School of Law and the author of The Nation that Never Was: Reconstructing America’s Story.

Last week, it happened again. Every few months, dating back to the primary campaign, Donald Trump or one of his surrogates has asked us to look back to the wartime detention of Japanese-Americans—not as a shameful episode from which we can learn, but as a template for national security policy. This time, Carl Higbie, the head of the Great America PAC, suggested that the Korematsu decision could serve as a precedent for a registry of Muslim immigrants.

The reaction was immediate. Just as when Trump himself, back in December, commented that some of his plans were “no different than FDR,” commenters from all over the political spectrum rushed to condemn the analogy. The detention decision was a tragic mistake, they suggested, and the Korematsu decision, though never formally overruled, is no longer good law.

This pattern seems capable of repeating itself indefinitely. Trump supporters invoke detention and Korematsu as an example of uncompromising security policy, and others respond that it stands instead for overreaction and prejudice. It could go on until President Trump actually enacts measures that rely on the analogy.

But it shouldn’t. The debate that has been recurring for the past few years is actually deeply flawed because neither side presents an accurate picture of the Japanese American detention—or the Supreme Court’s response. Trump’s supporters suggest that detention was harsh but necessary; his critics say that it was a mistake. But both sides seem to agree that the government believed it was justified. And both sides seem to agree that in the Korematsu case, the government offered its good-faith defense of detention, and the Supreme Court ruled that it was constitutionally sound. In fact, however, none of these things is true.

First, the government was deeply divided about the necessity of removing the Japanese Americans from the West Coast. While General John DeWitt, the commander in charge of the West Coast, did sincerely believe that Japanese Americans posed a threat of disloyalty, his belief was based on several factual premises—the existence of shore-to-ship radio transmissions from the Japanese American community, for instance—that other government agencies found to be false. Inside the Department of Justice, the lawyers who presented the government’s case to the Supreme Court mostly believed that removal was the product of racism, hysteria and economic opportunism. (One of the groups most supportive of removal was the Salinas Fruit Growers association, which sought to eliminate the competition from Japanese farms.) And with respect to detention, there was virtually no one who thought it justified on the grounds of national security. The detention camps came about because states in the interior of the country refused to accept the exiled Japanese Americans—the governor of Wyoming, for example, promised that if they tried to come to his state “there will be Japs hanging from every pine tree.”

Second, the government did not present a good-faith defense of the detention program to the Supreme Court. The same government lawyers who knew that General DeWitt’s factual claims were false presented those claims to the Court and encouraged the Justices to rely on them. The Court did rely on them—though when the full extent of government misconduct came to light in the 1980s, lower federal courts took the extraordinary step of vacating Fred Korematsu’s conviction.

Last—but perhaps most important—the Supreme Court never said that detention was constitutionally acceptable. Fred Korematsu wanted to stay in San Leandro with his Italian-American fiancée. He was convicted of violating the military order that required him to leave. (And, as noted above, that conviction was vacated on the grounds that the government had misled the Supreme Court.) The Korematsu case was not about the legality of detention.

There was a case about detention—the less well-known case of Mitsuye Endo—but in that case, the government lost. The Supreme Court said that the detention of an American could not be justified without some reason to doubt the loyalty of that specific individual—some reason beyond a blanket suspicion based on race. To solidify that ruling, Congress enacted the Non-Detention Act in 1971, providing that no citizen could be detained by the federal government except pursuant to an act of Congress.

By all means, we should look back to World War II detention to help with the choices we face now. But we should not think of that detention as either a tough but necessary reaction to a real threat, or a good faith mistake born of fear and ignorance. Exclusion of Japanese Americans from the West Coast was an opportunistic injustice built on lies; detention in camps followed only because Americans refused to accept the fellow citizens they had displaced. And we should not think that the Supreme Court approved the program, either. The Court’s approval of exclusion was based on government deception and misconduct, and when it came to detention, the Court said no. To truly understand the present, we must understand the true past. 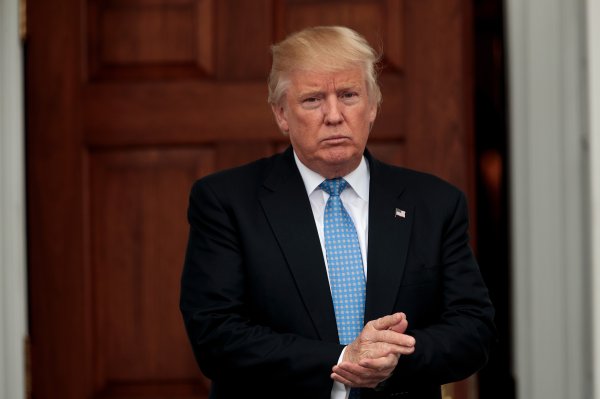 A Handy List of Donald Trump’s Biggest Conflicts of Interest
Next Up: Editor's Pick