Hundreds of Brooklyn residents gathered at Brooklyn Heights’ Adam Yauch Park on Sunday morning to rally together after playground equipment in the park was defaced with anti-Semitic and pro-Trump graffiti just days earlier.

Among those who turned up to the rally was Yauch’s fellow Beastie Boys co-founder Adam Horovitz — known to most by his stage name, Ad-Rock — who openly spoke out against the hateful messages of the park’s graffiti.

“I assuming that we’re all here today because we’re thinking the same thing,” he said. “Spray painting swastikas in a children’s playground is a messed up thing to do. And for many of us, it has special meaning, because this park is named for Adam Yauch, who was my friend and bandmate for over 30 years, but he was also someone who taught nonviolence in his music, in his life, to all of us and to me. But this is more about someone in New York City linking Nazi Germany to Donald Trump in a ‘h-ll yeah’ kind of way in a park where children play.”

He then encouraged them to make the positive changes in the world that they wanted to see.

“If you’re able to volunteer, volunteer…if you’re a musician, write that anthem. If you’re a writer, write. Take what you’re good at, and what you truly enjoy, and lend your services to the causes you care most about. ‘Cause we can’t, and we won’t, and we don’t stop.”

Ad-Rock was joined by local elected officials and religious leaders in the community, according to Rolling Stone, reporting that Senator Daniel Squadron, who represents the Brooklyn neighborhood, was in attendance. This is just one of other instances of swastikas appearing in acts of vandalism in New York City and around the country since the presidential election; hate crime reports are also on the rise. 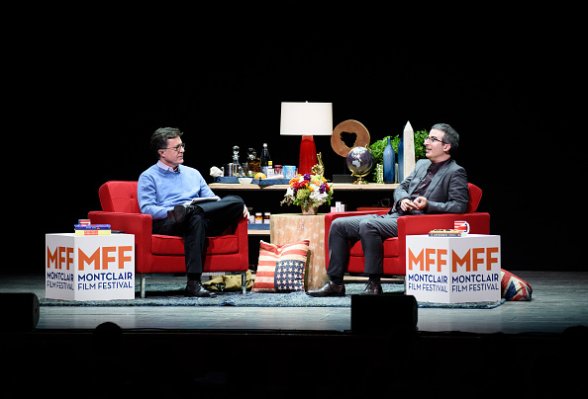 Stephen Colbert and John Oliver on Donald Trump's Election: 'Don't Give Him an Inch'
Next Up: Editor's Pick