A vet attends to a tranquilized rhino, which will be microchipped during an operation on Sept. 19, 2016, at the Pilanesberg National Park in the North West province, in South Africa. Rhino populations are threatened by poaching to feed China's voracious demand for rhino horn
AFP/Getty Images
By Charlie Campbell / Beijing and Mong La, Burma

The array of shapes and sizes leaves one agog. A bull’s penis is 2 ft. long and almost translucent; deer penis has a meaty, pink hue; snake penis looks like a bifurcated twig. “Snake penis has become more popular in China since the one-child policy ended,” says restaurant manager Zhang Yang, sparking another cigarette. “Many people ask for it now because they want a second child.”

Business is good at the Guo Lizhuang penis restaurant, which has 19 outlets across China. At Zhang’s branch, in Beijing’s well-heeled Sanlitun neighborhood, tables are booked weeks in advance, and the overwhelmingly male patrons of late middle age typically part with several hundred dollars for dishes that they believe will restore masculine or “yang” energy and, in turn, libido and sexual virility. A bull’s penis comes cheapest at 200 renminbi ($30); the most coveted is a fur seal’s penis at 2,800 renminbi ($400). “Fur-seal penis is the most expensive as it has lots of elements that are good for the body,” says Zhang, “but it’s also quite mild so you don’t get the inner fire.”

For that burn, there’s only one place to look. “In terms of nourishing the yang, tiger penis is definitely top. If you handle tiger penis properly, and mix together with Chinese herbs, it really has the best possible effect — much better than Viagra,” says Zhang. “Lots of people come here asking for tiger penis, but it’s illegal, so we don’t sell it.”

Cooks prepare an ox-penis dish, center, believed to give virility to those who eat it, at a specialty restaurant in Beijing in 2009
Elizabeth Dalziel—AP

The pharmacopoeia of traditional Chinese medicine (TCM) stretches back millennia, rooted in a system of balancing energy levels through diet, herbs and physical techniques like qigong, acupuncture or the circulation-aiding cupping therapy made world famous by U.S. swimmer Michael Phelps at the Rio Olympics. In these ways, TCM itself is benign. However, despite attempts by leading organizations to quash the belief, many ordinary Chinese labor under the false idea that TCM ascribes extraordinary health benefits to rare animal parts — and that is causing a real headache for practitioners and conservationists.

China’s growing affluence means that TCM is undergoing a legitimate renaissance, buoyed by government sponsorship as Beijing seeks to boost its global soft power. TCM had an almighty publicity coup when the chemist Tu Youyou won the 2015 Nobel Prize for her wormwood-based malaria treatment, artemisinin. The number of TCM-related papers in Science Citation Index journals has also soared 30-fold to 3,000 annually over the past two decades.

In August, China’s Ministry of Industry and Information Technology revealed that revenues from TCM made up 22.4% of the national pharmaceutical industry in the first half of 2016. The General Office of the State Council has even recommended that TCM be promoted in nations along Xi Jinping’s proposed “One Belt, One Road” trade route. According to Yanzhong Huang, senior fellow for global health at New York’s Council for Foreign Relations, advocates have engendered “a discourse that makes support of TCM a patriotic duty in China.”

However, conservationists warn that TCM’s resurgence has spawned a lot of unregulated quackery that, in turn, is related to an uptick in wildlife trafficking — a nefarious global trade that, the U.N. says, already generates $19 billion a year. The most trafficked animal on earth, for instance, is presently the pangolin or scaly anteater. An estimated 1 million of the creatures have been plucked from the wild across Asia and Africa for consumption almost exclusively in China, where many people believe their scales can be used to treat everything from rheumatoid arthritis to inflammation. In response, international prohibitions have been ramped up. On Sept. 28, the Convention on Illegal Trade in Endangered Species of Wild Fauna and Flora (CITES) conference in South Africa banned all trade in all eight species of pangolin.

A woman talks with a customer at her stall selling pangolin scales and other exotic-animal parts on Feb. 17, 2016, in Mong La, Burma
Taylor Weidman—Getty Images

However, international efforts to protect endangered animals are often not supported by domestic legislation and enforcement, so trafficking hot spots continue to boom. In Mong La, a seedy entrepôt in northernmost Burma (officially now called Myanmar), tiger penis is very much on the menu. Sitting across from China’s Yunnan province, the town lies outside central Burmese government control, and is instead run by an ethnically aligned rebel army, which turns a blind eye to myriad illicit activities. A legion of bare-legged sex workers emerge with the setting sun, handing out calling cards with labored smiles, while bleary-eyed gamblers hammer away at betting machines in dingy casinos.

But vice is only half the draw. Each morning, Mong La’s central marketplace teems with hawkers selling pangolin skins, the pelts of clouded leopards and tins of bear-bile powder. The town’s restaurants are flanked by live animals in cages — pangolin, civet cats, rare birds. Beneath a velvet curtain, four whole tiger carcasses wallow in a vat of grain alcohol atop a carpet of glistening ginseng root. “They’ve been in there for two years,” says a waitress. “But I don’t know where they came from.”

While the origin of this contraband is murky, its destination is never in doubt. Though it is very much part of Burma, the de facto language of Mong La is Mandarin, the clocks run on Beijing time, signs are in Chinese and Chinese cell-phone coverage can be picked up 30 miles before the border. As China’s economy has grown, so has Mong La’s wildlife trade. According to a study in the journal Biological Conservation, the number of shops selling wildcat parts in Mong La, for instance, increased from six in 2006 to 21 in 2014.

TCM has shown itself to be responsive to the plight of threatened animals in the past. During the 1980s, rhinos were on the brink of extinction as poachers killed the creatures for their horns. China was still a poor country at this time, thus the biggest markets for rhino horn were the booming but relatively small markets of Taiwan and Hong Kong. Following a public outcry, rhino was removed from the official TCM pharmacopeia and placed on CITES Index I — the strongest level of protection. Coupled with stringent domestic laws prohibiting sale and transportation, this led demand and price to plummet, allowing the rhino population to recover.

Today, however, the game has changed entirely, and demand is far beyond anything that TCM authorities are able to discourage or contain. That is the result of a rapidly developing China, whose 1.3 billion people wield far more purchasing clout than the combined 32 million of Taiwan and Hong Kong — and that means that rhinos are, once again, under threat. The upwardly mobile, 89 million Vietnamese are also partial to rhino horn. According to a survey by the San Francisco–based charity WildAid, 71% of respondents in the Vietnamese cities of Hanoi and Ho Chi Minh believed that rhino horn had health benefits, with 62% believing it could cure assorted diseases and 37.5% specifically saying that it could cure cancer.

Reputable TCM practitioners have explicitly distanced themselves from animal-based remedies. Animal penises, for one, do not help male performance, says TCM expert Chen Shilin, dean of the Institute of Chinese Materia Medica at the Academy of Chinese Medical Sciences in Beijing. “It is merely a folk therapy,” he says. “And using tiger bones is now obsolete.”

Yet misinformation is rife and official protection is lax. In July, China rebooted its Wildlife Law — the first review of this key legislation in three decades. Given the overriding threat posed to many endangered species by the world’s most populous nation, this should have been a golden moment for environmentalists. However, the final draft left loopholes that essentially allow for endangered-animal farming and trading for “special purposes.”

Tiger claws and teeth are sold at a high-end shop on Feb. 16, 2016, in Mong La, Burma
Taylor Weidman—Getty Images

That means that tigers, for one, can be reared and slaughtered for ornaments like tiger-skin rugs and tiger-bone wine. Bears can also be farmed for their pelts and bile — which is taken by many Chinese for gall-bladder and liver conditions, even though there are herbal alternatives that do not involve harming animals. Such farming sustains the perception that exotic animal parts are valuable and to be coveted. The World Federation of Traditional Chinese Medicine Societies removed tiger from its pharmacopeia as long ago as 1993, but that hasn’t stopped the growth of some 200 Chinese commercial farms, where experts estimate that between 5,000 and 6,000 tigers are being raised today.

Pangolin is another example. A CITES Index I listing used to mean that pangolin would automatically be afforded Grade I National Protection status in China. But the revised Wildlife Law allows the government the discretion whether to grant that protection or not, and currently it permits an annual legal quota of 20 tons (the illicit trade is, of course, far greater). Ultimately, “CITES is not particularly useful without full domestic implementation,” says Vicky Lee, trade-and-policy analyst for the Environmental Investigation Agency, a British NGO.

Unregulated TCM is not just dangerous for wildlife: it harms people too. One recent fad has been for manta-ray gill raker plates — the thin filaments these majestic creatures use to filter food from seawater. In China’s southern province of Guangdong, they can fetch $500 per kilo. But manta rays, which are on CITES Index II, are not rapid breeders. In fact, they typically produce one pup every two years, meaning this trade is especially destructive to their populations.

This is despite the fact that manta ray has never been included in any TCM pharmacopeia; its use was simply concocted by seafood salesmen, who flaunted rake plates as a cure for everything from cancer to chickenpox, creating a trade estimated to be worth $11.3 million a year where none existed before. More worryingly, gill raker plates have been marketed as an aid for lactating mothers. But when WildAid did tests, they found very high levels of cadmium, arsenic, lead and other toxins present. “They were saying manta rays can help mothers produce more breast milk, but given the heavy metals present, this was really not a good thing,” says John Baker, managing director of WildAid.

Even though remedies like animal penis or manta ray are never prescribed in reputable TCM hospitals, there is nothing stopping restaurants or salesmen from advocating their health benefits. Lixin Huang, who is both the executive director of the American College of Traditional Chinese Medicine and an animal-conservation activist, wants strict regulations and heavy penalties to “completely separate” the practice of TCM in reputable clinics from the animal-based “folk remedy” industry. Yet there doesn’t appear to be the political will in China to make that happen.

Says Huang: “Consumers are really confused, and that does no good for protecting wildlife or the TCM practiced by the medical profession.” 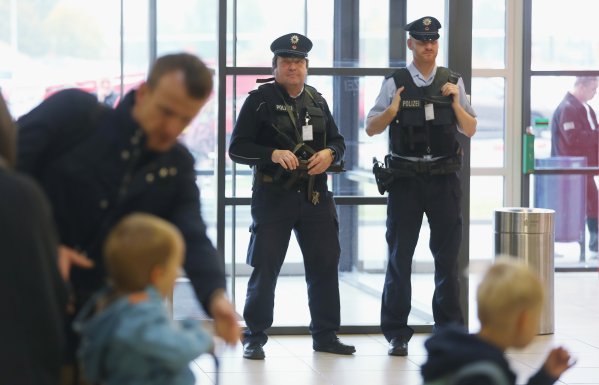 State Department Warns of Possible Terrorist Attacks in Europe
Next Up: Editor's Pick