Rebel-Held Aleppo No Longer Has a Functioning Hospital

There are currently no functioning hospitals in the rebel-held section of the Syrian city of Aleppo following days of heavy shelling and airstrikes by Syrian government and Russian warplanes, medical officials say.

Airstrikes took out the last remaining hospital on Friday, according to the Health Directorate in the rebel sector, medics, and several nongovernmental organizations working closely with Aleppo’s hospitals. Warplanes bombed five separate hospitals in the rebel enclave in the span of a few days.

The shutdown means there are no facilities left to aid wounded civilians in eastern Aleppo, where as many as 300,000 people are living under a siege imposed by the regime of President Bashar al-Assad. Medics may continue to work in makeshift clinics elsewhere in the city, but as of Friday there were no fully equipped hospitals still operating.

Syrian medics and activists fear that Russia now intends to force an endgame in the battle for eastern Aleppo, a decimated urban landscape where armed opposition groups have held out against the regime for more than four years. The eastern half of the city is a critical redoubt for rebel groups, who have lost ground to the regime since the Russian bombing campaign began in September 2015.

“I think the value of the hospital—it’s important medically but it’s more important psychologically. When people know there is a place where they can be treated and they feel safe somehow. When they know they’re all out of service, they panic. I think that’s what the regime is trying to do,” says Mohammad Yasser Tabbaa of the Syrian Expatriate Medical Association, a group supporting hospitals in rebel-held parts of Syria.

The attacks on the hospitals came as Russia and the Assad regime continue a devastating military offensive on eastern Aleppo and other rebel-held areas. The current campaign began on November 15 following weeks of relative calm.

The current offensive comes as United States President-elect Donald Trump suggests he will tilt American foreign policy toward Russia. Trump has implied that he will cut U.S. support to Syrian rebel groups and refocus U.S. policy on battling Islamic State militants. Trump has named as his national security advisor Lt Gen Michael Flynn, who once called for the U.S. and Russia to “align” their strategies in Syria. Trump spoke with Russian President Vladimir Putin the day before Russia launched the current offensive.

The substance of Trump’s foreign policy won’t take shape until he takes office in January, but in the meantime, supporters of the Syrian opposition believe Russia is taking advantage of the lame duck period of Obama’s presidency by intensifying its military campaign in support of the Assad regime. Russia is also operating during a downturn in international attention toward Syria, as international media and governments grapple with Trump’s surprise upset of former Secretary of State Hilary Clinton in the election.

“This is rather what the Russians are playing on is this lull period where you’re in a transition mode between two American presidents. And they’re taking full benefit of this to do the maximum they can do, taking as much territory as they can before there is a U.S. president fully in power who basically can start affecting things on the ground,” says Assaad al-Achi, a Syrian economist and civil society activist with the group Baytna Syria.

This week’s assault on hospitals in Aleppo were the culmination of a long series of attacks by Russian and Syrian regime forces on medical facilities in opposition-controlled areas. Medical workers believe that Russian and government attacks on hospitals are part of a systematic attempt to eliminate critical health infrastructure in the rebel-held territory. Over a span of 10 days ending on Saturday, regime and Russian attacks hit at least 12 hospitals and other medical facilities, killing two medical staff, according to the Union of Medical Care and Relief Organizations, which is known by the acronym UOSSM.

At approximately 8:30 p.m. on Friday, bombardment hit east Aleppo’s Omar Bin Abdul Aziz Hospital. An Al Jazeera film crew was in a pediatric hospital at the moment of the attack. In their report, the lights suddenly go out and a crashing sound comes through the hospital, sending medics and patients into a panicked attempt to find safety. At one point, two nurses pluck infants out of incubators and then embrace each other, weeping.

First responders and Aleppo residents also reported a chemical attack on east Aleppo’s Sakhour neighborhood. The Syrian Civil Defense, commonly known as the White Helmets, released a graphic video on Sunday that appeared to show the bodies of four small children, killed by what the narrator of the video says is chlorine gas.

Even if Russia, the Assad government, and pro-Assad militias intend to retake eastern Aleppo soon, long months of fighting could await them. Arrayed against them are thousands of opposition fighters who have been entrenched in the city for years. “This is a city where you’re going to have to fight city by city and road by road,” says Achi “I don’t think it’s going to be an easy fight. It’s going to take time,” he adds. 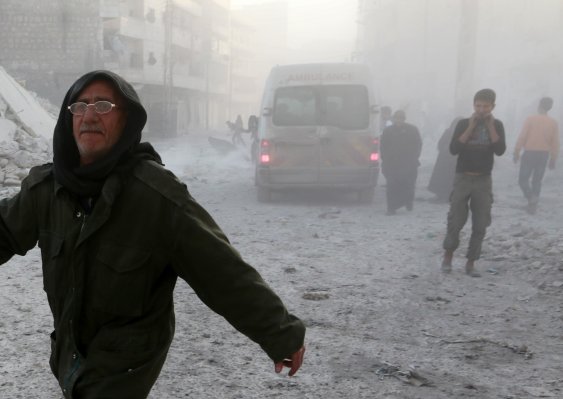