Rep. Danny Davis, D-Ill., center, and his son, Stacey Wilson, give a news conference at the 5th District police department in the Englewood neighborhood of Chicago on Nov. 18, 2016.
Alyssa Pointer—AP
By Mahita Gajanan

Two teenagers have been charged as adults with first-degree murder in the shooting death of Jovan Wilson, the grandson of U.S. Rep. Danny Davis.

Chicago police said suspects Tariq Harris, 16, and Dijae Banks, 17, took part in the killing of the 15-year-old Wilson. Wilson was shot in the head on Friday after an argument over gym shoes, police said.

“There was a history between the young people involved, and it was a dispute over gym shoes,” Anthony Guglielmi, a spokesman for the Chicago Police Department told the Chicago Tribune.

Harris and Banks will appear in court later Sunday and are being charged as adults, Guglielmi said.

Davis, who represents Illinois’ 7th congressional district said in a statement that he was “saddened” to report his grandson’s death, which comes in a year of unprecedented violence in Chicago.

“Unfortunately, this is another example of a fifteen year old with a gun who shouldn’t have never had it,” he wrote. “Where did the gun come from? How did he get it? And of course, he never should have had it.” 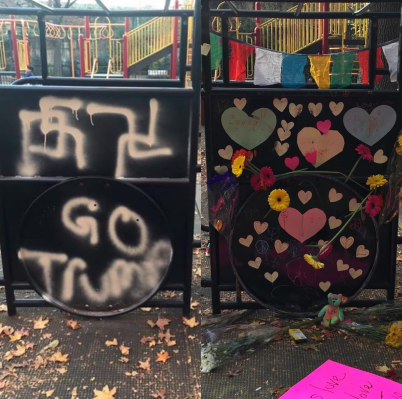 NYC's Adam Yauch Park Vandalized With Swastikas. Until Kids Replaced Them With Hearts
Next Up: Editor's Pick