The morning Donald Trump won the presidential election, Mitski Miyawaki cried in her bed out of disbelief and disappointment.

But when Miyawaki, an indie-rock musician based in New York City, realized she was going to tour Florida and North Carolina—two states that Trump won—just after the election, she decided to use her music as a “source of comfort.”

“I don’t know the first thing about how to create change systemically,” she said in between tour stops in North Carolina. “My brain can’t comprehend how to do anything about the overall building that is America. But I know how to make music. I know how to reach individual hearts and emotions.”

Her shows over that week were intense. She said, “There’s more of this feeling that ‘oh, I really have to do this. I have to be here for these people.’ It’s my job to make everyone feel better in some way. In a really selfish way, it’s helped me feel useful.”

Trump’s win has been felt as a reset for some artists—especially left-leaning ones—as they navigate their work in the wake of the election. Common belief dictates that art thrives under oppression. But with Trump threatening to repeal Obamacare, deport millions of undocumented immigrants and ban Muslim immigration, it’s not so much that artists are gearing up to create spectacular work—they are trying to find common ground.

Since becoming President-elect, Trump has specifically threatened the artistic experience. After Hamilton actor Brandon Victor Dixon addressed Vice President-elect Mike Pence on behalf of the cast at Friday’s performance, Trump called for an apology. Dixon’s message to Pence said, “we are the diverse America who are alarmed and anxious that your new administration will not protect us, our planet, our children, our parents or defend us or hold up our inalienable rights.”

Trump’s furious response, laid out over a series of tweets, claimed Pence was “harassed” at the performance, called the hit musical “highly overrated” and demanded the cast apologize to him. Pence has said he was not offended. Dixon on Monday said there was nothing to apologize for.

Many other left-leaning artists who supported Hillary Clinton felt a drive to bring people together. Following the election, Molly Rose Quinn, a writer and the director of public programs at AIDS nonprofit Housing Works Books in New York City, reached out to a number of colleagues and peers to create Art After Trump, an upcoming event at the bookstore where artists will read short responses to the election and the upcoming presidential administration.

“The spirit that I feel is that people want to work,” she said. “They want to be productive. They want to organize.”

The sense of being productive, and of finding a way to connect with others resonated with the poet Richard Blanco, who said the election made him realize he held a “false sense of security.” Now, he wants to use his poetry to help people talk to each other.

“It’s the poet’s job to offer us a way out, a glimmer of hope, something that gets toward another space, another place—a healthier place,” Blanco, who is based in Maine, said. “It’s difficult to do that at times, but we can’t give.”

The role of the poet, he said, is now connected with the public realm more than ever.

“In a weird way, we’re in the circumstances in which poetry can come to the surface in a different, more powerful way because people need something,” he said, adding, tongue-in-cheek, “Maybe, finally, a poet will get arrested in America.”

The writer Mira Jacob, who, a day after the election, published a BuzzFeed essay about the complications of explaining the election to her 8-year-old son, is approaching her work with a similar attitude to Blanco. The election year laid bare the lack of consciousness in many communities about racism, and Jacob, who lives in New York, wants to explore the lack of connection. An Indian-American writer, Jacob said the election made clear how people will ignore how race plays out in America, especially in Indian and other Asian communities, where racism remains unexplored.

“There’s a real ignorance for many brown people,” she said, explaining that in the U.S. if you are not black or white, you tend to fall somewhere “in between.” She continued, “That’s not the reality. Every brown has its own set of problems.”

Trump’s election has brought up a tremendous amount of pain, sadness and fear—allowing full access to these feelings will propel art over the next few years, Jacob said. She advised tapping into such emotions.

“What does it look like to believe your feelings are dead-on and accurate? Generate that,” she said.

The writer Porochista Khakpour has been “activist mode” since the election, and said her work is not her primary concern at the moment. Over the past couple weeks, she has taken to speaking out on social media, calling state representatives, donating money to organizations and provide support for the college freshmen she teaches at Bard College.

“For me, in times of emergency, it’s far more important to be an activist than artist,” she said. “Those things don’t have to be at odds, but we’re in an emergency situation right now. The urgency I feel—it’s very intense.”

Khakpour, who was born in Tehran and now lives in New York, said she was a “child of war and revolution,” and taking such an approach to the Trump presidency feels like the natural thing to do. The art will come later.

“I’m sure I’ll write about this at some point, but right now, I need to be in this,” she said. “The role of art is very, very important, but for me, it takes a second. We’re still very much in it.”

Khakpour said she was active in a different way during the George Bush administration, especially after the Sept. 11 terror attacks. In the 1990s, her work covered arts and entertainment, and she wasn’t as invested as presenting herself as an Iranian American. But following the attacks and the subsequent public perception of Muslims and people of South Asian descent as terrorists, she got political in her writing.

“It suddenly became very important to be a positive public figure,” she said. “I felt I had a service to also do.”

Under the Trump administration, Khakpour said she has to continue publishing her writing on race and ethnicity.

“I feel like it’s a very big obligation to have my voice be very amplified,” she said. “With media being dazzled by evil and Trump not denouncing everything, every time he doesn’t say something, every time the world confirms my worst fears, I have to put my work out there so that it at least helps people that identify with me in some way.” 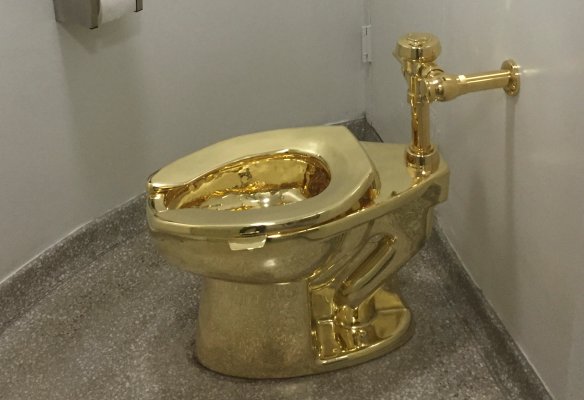 This Golden Toilet Is the Ultimate Instagram Selfie Bait
Next Up: Editor's Pick