Donald Trump's Administration Is a Basket of Deplorables

President-elect Donald Trump listens as President Barack Obama talks to the media in the Oval Office of the White House in Washington on Nov. 10, 2016
The Washington Post/Getty Images
Ideas
By Darlena Cunha

As Donald Trump pulls together his Cabinet, advisers and broader Administration, two themes are becoming very clear: loyalty to Trump and racism.

He’s choosing people who have shown hate toward immigrants, people of color, Muslims, LGBTQ people and women. And he’s giving them a huge amount of power to act on that hate.

Trump has so far filled his top advisory positions with white men who have shown outspoken and unconditional support throughout Trump’s divisive campaign, which is alarming enough on its own, as no President should surround himself with sycophants. In a normal transition period, this would be the focus. Instead, we must focus on the far more pressing problem: actionable racism in the Cabinet.

This is not normal.

Trump’s new National Security Adviser, Michael Flynn, has two huge marks on his record. Let’s start with his fear-stoking repudiation of an entire religion, Islam. Seeking to distance himself from moderate Republicans from as early as a decade ago, Flynn has dangerously lumped millions of people into one radical group.

In August 2016, Flynn tweeted: “Fear of Islam is RATIONAL: please forward this to others: the truth fears no questions…”

The tweet included an embedded five-minute video that lists individual terrorist acts tied to radical terrorist groups with the label “Muslims” in a repetition loop, which clearly incites Islamophobia.

The video was produced by Clean.Tv, an alt-right outlet publishing such works as “Hypocrite Megyn Kelly Sex Boasts on Stern, poses NUDE nearly yet knocks Trump!” and “Stronger TOGETHER = TO GET HER Locked up! (anagram).” Our future National Security Adviser links to fake racist sites, in seriousness.

Flynn’s other concerning attributes are his post-political ties to Russia and his role as a lobbyist for Turkish government interests. So much for that “no lobbyist” mandate Trump came out with. After a stint as a head of the Defense Intelligence Agency, Flynn has been a regular commentator on Russia’s state-run television, and has been paid to speak for its 10th anniversary gala. Amid investigations of cyberhacking and reports of Russia’s involvement in our election, this should raise more than red flags. It should raise blood pressures.

Next up is new Jeff Sessions, Trump’s pick for Attorney General. An Alabama Senator for two decades running, Sessions was denied federal judgeship by a Senate Judiciary Committee run by Republicans because of racist remarks that have dogged his career. Sessions said he thought the KKK was O.K. until he found out members smoked pot. Sessions first became nationally known for prosecuting three black civil rights workers for voter fraud. The jury did not convict them.

In addition, Sessions opposes not only illegal immigration and a path to citizenship, but also has called for a fadeout of legal immigration as well, including visa programs for workers in science, math and technology.

Trump’s pick for CIA director, Mike Pompeo, is a Tea Party Republican supported by the Koch brothers. In 2013, Pompeo called Muslim leaders complicit in the Boston Marathon bombing. What a strange day in America to have this be the least of our worries.

All three of these men have years of Washington experience under their belts. Not much swamp-draining going on after all, it seems.

“You have an individual, Mr. Bannon, who’s basically creating the ideological aspects of where we’re going,” added Duke. “And ideology ultimately is the most important aspect of any government.”

Quick reminder: this is the former head of the KKK speaking.

Sessions and Pompeo must be confirmed by the Senate; Flynn and Bannon serve at the pleasure of the President.

We are living in a bizarre world right now. None of this is normal. Yet, as we speak, our congressional leaders are aching to get back to business as usual, and doing so by downplaying this rhetoric and ideology, ignoring the fact that it’s seeping into the government they claim to love. It is our job to hold them accountable for the leadership at our highest tier. They’re afraid they’ll lose their political careers if they make a moral stand against Trump. We must convince them that they’ll lose their political careers if they don’t. Remember, our government works for us, its constituents. We have the power to move them to action, but we must use it. 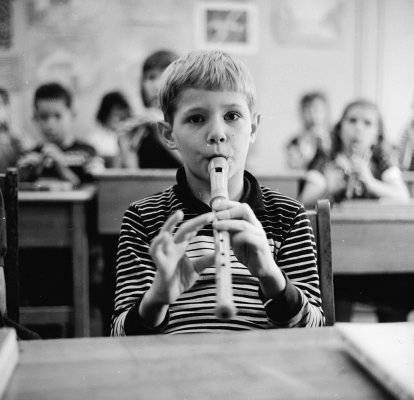 Music Instruction Could Help Treat Kids with Autism
Next Up: Editor's Pick