By tapping retired three-star Army General Michael Flynn and Kansas Tea Party Congressman Mike Pompeo as his first pair of national-security honchos, Donald Trump is upsetting the Republican foreign policy applecart in a big way. While you could sense the shudders going through uniforms at the Pentagon and pinstripes at the State Department, there were also private murmurings that the appointments could signal what some believe are needed, overdue changes in the way the U.S. deals with the rest of the world.

“I am pleased that Lieut. General Michael Flynn will be by my side as we work to defeat radical Islamic terrorism, navigate geopolitical challenges and keep Americans safe at home and abroad,” Trump said in a statement announcing the appointments. “General Flynn is one of the country’s foremost experts on military and intelligence matters and he will be an invaluable asset to me and my administration.”

Flynn, 57 and a registered Democrat, was a highly-regarded 35-year Army intelligence officer who ended up running the Defense Intelligence Agency, the military’s CIA. But he ran roughshod over some in the agency, in part because he wanted to send more DIA personnel overseas. That led the Obama Administration to ease him out in 2014 after less than two years in the post. Former colleagues winced as Flynn, Trump’s top military adviser during the campaign, joined fellow attendees at the Republican National Convention last summer in shouting “lock her up” about Hillary Clinton.

As national security adviser—the post once held by Henry Kissinger in the Nixon Administration—Flynn will be responsible for reconciling for Trump the conflicting views of the Pentagon, State Department, and other U.S. agencies focused overseas. The post can be powerful—that depends on the relationship between the adviser and President—because the adviser is the closest foreign affairs expert to most Presidents, and usually gets the final word with the commander-in-chief. That’s especially critical for a President with no military background and scant foreign policy experience.

The post doesn’t require Senate confirmation, which could have proven challenging. His Flynn Intel Group has murky ties to Middle East nations, and Flynn was paid to speak in Moscow by a Kremlin-funded TV network, where he sat alongside Russian President Vladimir Putin. Like his boss, he also is known for making controversial statements. “Fear of Muslims is RATIONAL,” he tweeted in February.

His appointment generated quick congressional ire. House Minority Whip Steny Hoyer criticized Flynn’s “incendiary, hateful comments about Muslims,” and warned of the backlash they might generate. “We have learned many lessons since 9/11,” Hoyer said, “one of which is not to provide our enemies with fodder to fuel anti-American hatred.”

Trump said Pompeo “will be a brilliant and unrelenting leader for our intelligence community to ensure the safety of Americans and our allies.” Pompeo, 52, a West Point graduate, served as a cavalry officer in the Army from 1986 to 1991. He was first elected to Congress in 2010, where he served on the intelligence committee, and just completed his third term.

Although he’s a graduate of Harvard Law School—he was an editor at the Harvard Law Review, like Obama—he doesn’t speak in the kind of diplomatic understatement commonly heard in Cambridge, Mass. “I look forward to rolling back this disastrous deal with the world’s largest state sponsor of terrorism,” he tweeted Thursday, referring to last year’s international pact designed to restrain Iran’s nuclear program.

Critics wasted no time giving a thumbs-down to the appointments. “This Administration is turning out to be as scary, bigoted, and abnormal as most people feared,” said Jon Soltz, an Iraq war veteran and chairman of the left-leaning VoteVets.org political-action committee. “We call on all lawmakers, and the media, to stop normalizing the trajectory we are now on.” 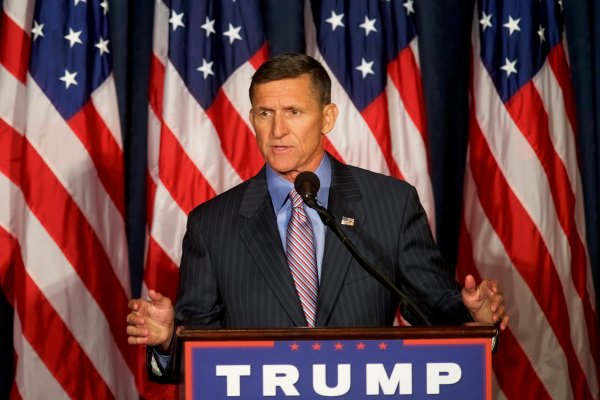 Michael Flynn Will Be Trump's National Security Adviser. Here's What He Thinks About the World
Next Up: Editor's Pick