An adult and baby Atlantic bottlenose dolphin swim in one of the pens at the SPAWAR facility on Point Loma, Calif Nov. 29, 2012.
John Gibbins—AP
By Kate Samuelson

Back in 2012, the U.S. navy announced a plan to replace its team of 80 mine-hunting dolphins with a fleet of autonomous underwater 12ft robots from 2017 onwards.

However, four years later, Project Knifefish is at risk of not being ready by the new year – and may also require $751.5m more funding, in addition to the approximately $91m that the program had received by February 2016.

The U.S. navy has used dolphins, sea lions, killer whales and even sharks to track mines since the 1950s. Knifefish, which was developed with the contractor General Dynamics, was supposed to provide a low-cost robotic alternative, with the mammals reassigned to port security and retrieving objects from the sea floor.

But, according to the San Diego Reader, government auditors say the device is long-off from being ready for use and the cost is rising. “The Knifefish program is at risk of not being ready for the initial production decision in the fourth quarter of FY 2017,” states an audit document from the Pentagon, the Reader reports.

“As of February 2016, the program office had received approximately $91.0 million of the program’s estimated acquisition program baseline for research, development, test, and evaluation funds. However, the Knifefish program has not demonstrated the system’s ability to perform the key performance parameter of single pass detection, classification, and identification of bottom and buried mine capabilities.” 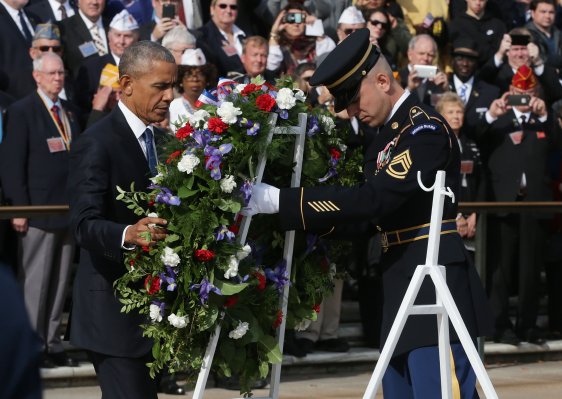 How the United States Can Help Its Veterans
Next Up: Editor's Pick