Michael Flynn Will Be Donald Trump's National Security Adviser. Here's What He Thinks About the World

As Donald Trump’s national security adviser, retired Lt. Gen. Michael Flynn will have the President’s ear on the country’s military and foreign policy affairs, but he’s espoused controversial views in the past.

Flynn, the former head of the Defense Intelligence Agency under President Obama, 7 for months, and his appointment marks another clear example of the President-elect rewarding loyalty in his budding administration.

“I am pleased that Lieutenant General Michael Flynn will be by my side as we work to defeat radical Islamic terrorism, navigate geopolitical challenges and keep Americans safe at home and abroad,” Trump said in a statement Friday. “General Flynn is one of the country’s foremost experts on military and intelligence matters and he will be an invaluable asset to me and my administration.”

Here’s what we know about Flynn’s worldview.

On the Middle East

Flynn holds hardline views on Islam and the Middle East. Flynn was fired from his post as the head of the Defense Intelligence Agency in late 2014, which he says was because he wanted to identify terrorists as radical Islamists and “clearly and forcefully attack their crazy doctrines,” he wrote in the New York Post this year. (U.S. officials said he was fired due to poor management.) This year, while promoting his new book, Flynn also wrote in TIME about the need to “wage ideological war against radical Islam and its supporters.” In the book The Field of Fight, Flynn also writes of the need for the U.S. to form more partnerships with nations in the Middle East and help them defeat the “violent Islamists” within their borders.

Flynn has been criticized for some of his rhetoric surrounding the topic, including a February tweet which said, “Fear of Muslims is RATIONAL.”

Flynn has come under similar fire as Trump for apparent coziness with Russian President Vladimir Putin. His Russian policy aligns with Trump’s oft-stated view, “Wouldn’t it be nice if we got along with Russia?” The Washington Post reports that Flynn acknowledged being paid to give a speech and attend an anniversary party for the Kremlin-backed RT television network in Moscow last year. He was seated next to Putin at the party.

Flynn wrote an op-ed in The Hill in November arguing the Obama administration isn’t doing enough to support Turkey, a U.S. and NATO ally whose relationship with the United States has been worsening. Turkish President Recep Tayyip Erdogan wants the U.S. to hand over Fethullah Gulen, a Pennsylvania-based religious leader accused of backing the Turkey’s failed military coup this year, and Flynn thinks the President should. “We need to adjust our foreign policy to recognize Turkey as a priority,” Flynn wrote. “We need to see the world from Turkey’s perspective. What would we have done if right after 9/11 we heard the news that Osama bin Laden lives in a nice villa at a Turkish resort while running 160 charter schools funded by the Turkish taxpayers?… We should not provide [Gulen] safe haven.”

Over the summer when Flynn was being considered for Trump’s running mate, he broke with Republican anti-abortion orthodoxy on abortion during a television interview. “Abortion, I think it’s a thing for women,” he said on ABC in July. “I think women have to be able to choose what they — you know, that — the — sort of the right of choice. But I think that that’s a — that’s a difficult legal decision that — and I think that women are so important in that — in that decision-making process. … They are the ones that have to make the decision because they’re the one that’s — ones that are going to decide to bring up that child or not.”

In the same ABC interview Flynn, a registered Democrat, seemed to support same-sex marriage, or at least agree with settled law on the matter. “What people do in their private lives, I’m not — these are not big issues that our country’s dealing with that are — that will cause our country to collapse,” he said. 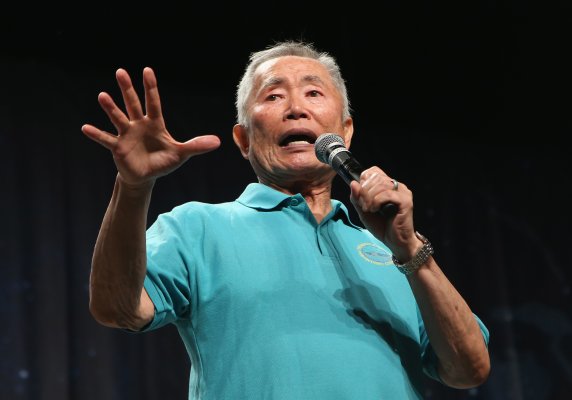 George Takei: We Must Not Let Muslims Be Treated Like Japanese Americans in WWII
Next Up: Editor's Pick