Beloved Hogwarts headmaster Albus Dumbledore does not make an appearance in Fantastic Beasts and Where to Find Them. But director David Yates has already confirmed he will play a role in (at least) the second installment of the five-film franchise, so it seems likely fans will soon learn more about the early life of J.K. Rowling’s favorite character.

When Newt Scamander (Eddie Redmayne) arrives in America at the beginning of the first film, it’s December 1926, meaning Dumbledore is not yet the headmaster of Hogwarts, but working as the school’s Transfiguration professor. In fact, the sole mention of Dumbledore occurs when Percival Graves (Colin Farrell) — who is later shown to be dark wizard Gellert Grindelwald (Johnny Depp) in disguise — reveals he was the only teacher who argued against Newt’s expulsion from Hogwarts. “I wonder,” Graves says. “What makes Albus Dumbledore so fond of you?”

While this may sound like a simple name drop, fans know that Rowling — who wrote the film’s screenplay — is particularly good at planting clues in her work. This means any insignificant detail has the potential to turn into something major later on. And as Rowling herself offered a cryptic hint about this particular line on Twitter back in April — “Albus Dumbledore is fond of Newt Scamander for the same reasons that I am fond of Newt Scamander” — it seems likely that Dumbledore’s attachment to his former student will have a greater meaning.

To figure out how this narrative may unfold, let’s take a look at Dumbledore’s backstory. When Harry, Ron and Hermione meet Dumbledore’s brother, Aberforth, in “The Missing Mirror” chapter of The Deathly Hallows, he tells them that Dumbledore befriended Grindelwald while living in Godric’s Hollow after graduating from Hogwarts. However, the pair’s relationship came to an abrupt end when Aberforth confronted them about their plans to begin a wizarding revolution, a three-way duel ensued and Dumbledore’s sister, Ariana, was killed by a stray curse.

So how does Scamander come into play? When the eccentric magizoologist arrives in New York City at the start of Fantastic Beasts, he comes bearing an enchanted suitcase full of magical creatures. While most of the beasts living inside are animal-like in both look and nature, it turns out he is also housing something known as an Obscurus. The mysterious entity is revealed to be a parasitic force that grows inside children (called Obscurials) with repressed magical abilities, slowly killing them as it wrecks havoc on the surrounding world.

Scamander is in possession of an Obscurus only because he was able to remove it from a young girl in Sudan. However, this seems to be an incredibly rare — or even unheard of — accomplishment, a detail that could hold a major clue as to why Dumbledore might have such a soft spot for him.

In the same Deathly Hallows chapter referenced above, Aberforth reveals that when Ariana was 6 years old, she was attacked by a group of Muggle boys who saw her practicing magic. The incident traumatized her so severely that from there on out she refused to use her abilities, causing them to burst out of her during uncontrollable fits. One such episode even resulted in the death of her mother. Here’s how Aberforth describes what happened to Ariana:

While the term Obscurial is not used to describe Ariana in Harry Potter, her condition sounds similar to that of Credence Barebones (Ezra Miller) in Fantastic Beasts, who is revealed to be an Obscurial near the end of the film. It’s known that Dumbledore was haunted his entire life by what happened to his sister, so it makes sense that he would throw his support behind someone working to help understand these malevolent magical forces.

Of course, this is by no means the only reason Dumbledore could be fond of his former student. Scamander is a self-professed outsider — preferring the company of his beasts to that of other people. Coincidentally, this happens to be the exact type of child Dumbledore was known to show compassion for throughout his Hogwarts career — with Hagrid and Neville Longbottom being two prime examples. It’s quite possible Dumbledore was one of the only people able to bring Scamander out of his shell and in doing so, formed a strong bond with him.

In any case, we’ll all have to wait for the sequel to find out for sure. 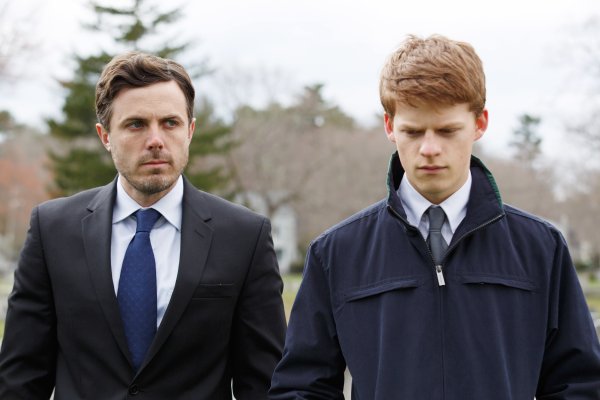 Review: Casey Affleck Is the Anchor and Soul of Manchester by the Sea
Next Up: Editor's Pick