During the 1990s, two amateur historians, Neil Howe and the late William Strauss, developed a new theory of American history in two books, Generations: the History of America’s Future (1991), and The Fourth Turning: An American Prophecy (1997). They identified an 80-year cycle in American history, punctuated by great crises that destroyed an old order and created a new one.

Though their theory is not widely taught in colleges or discussed in the media, Strauss and Howe may well play a major role in Donald Trump’s administration. Stephen Bannon, the former head of Breitbart News who has been appointed Trump’s chief strategist in the White House, is very familiar with Strauss and Howe’s theory of crisis, and has been thinking about how to use it to achieve particular goals for quite a while. I know this because Bannon interviewed both Neil Howe and myself in 2009 while he was making a documentary film about the ongoing financial crisis. The film, called Generation Zero, discussed those ideas in some detail.

Bannon focused on the key aspect of their theory, the idea that every 80 years American history has been marked by a crisis, or “fourth turning,” that destroyed an old order and created a new one: The great crises identified by Strauss and Howe included the era of the American Revolution and the Constitution (1774-1794); the Civil War and its immediate aftermath (1860-68); and the Depression and the Second World War (1929-45). Doing the math, they predicted another great crisis sometime in the first 15 years of the 21st century.

Strauss and Howe’s major prediction has now obviously come true: Few would deny that the U.S. has been in a serious political crisis for some time, marked by intense partisan division, a very severe recession, war abroad and, above all, a breakdown in the ties between the country and its political establishment.

I was one of very few professional historians to become interested in the work of Strauss and Howe, and I incorporated their insights into books on the origins of the Vietnam War and Franklin Roosevelt’s role in leading the nation into World War II. I have also incorporated their theory into analyses of European history and current events. I must admit that I did not know exactly what I was getting into when Bannon, who was then working at the conservative group Citizens United, contacted me to ask me for an interview, but I appreciated any chance to discuss Strauss and Howe’s ideas and the crisis that was by then indisputably upon us. Bannon is both intelligent and charismatic, and he clearly enjoyed our interview as much as I did. In the finished film, he used my interview perfectly fairly, without attempting to give it his own extreme right-wing slant.

The power of Strauss and Howe’s theory of crises comes from its lack of a specific ideology. My own interpretation of it is that the death of an old political, economic and social order creates an opportunity for any determined movement or leader to put a new vision in place. To use the most striking example, both the United States and Germany were in the midst of a terrible economic and political crisis in 1933. The United States turned to Franklin Roosevelt and the New Deal; Germany turned to Adolf Hitler and National Socialism.

In 2009, when Bannon and I met, I hoped that Barack Obama and the Democratic Congress would use the economic crisis of our own age to revive the values of the New Deal. Bannon obviously had other ideas about where the crisis would lead.

As it turned out, Obama failed to embark on a New Deal. He evidently believed that there was nothing fundamentally wrong with our system and that it could be fixed with only marginal adjustments. Late in his term, he told David Remnick of The New Yorker that Presidents could not, in fact, remake American society, and that that was a good thing. That differentiated him from Lincoln and FDR—and also from today’s Republican Party.

Since at least 2000, in my opinion, the Republican Party has managed to seize and generally keep the initiative during our current crisis precisely because it is the revolutionary party of change, while the Democrats are essentially the party of the status quo. The Republican stance goes back, of course, to the early career of Newt Gingrich in the 1980s. (Gingrich was interviewed at great length in Generation Zero and is evidently destined for a very high position in the new administration. John Bolton, another possible Secretary of State, is also interviewed.) Meanwhile, House Speaker Paul Ryan has been dreaming for years of undoing Medicare and Social Security. The opportunity to do so has now come.

Trump, Bannon and the rest of the Trump campaign have already managed to destroy the old political order. Trump wiped out a slate of traditional Republican candidates and has won the White House, despite losing the popular vote. Meanwhile, a ceaseless Republican political offensive at various levels of government has given Trump an entrenched majority in the House of Representatives and a small majority in the Senate. Soon the conservatives will have a majority on the Supreme Court.

What will they do? Their rhetoric and personalities, viewed in the context of Strauss and Howe’s theory of crisis, suggest that they will not be bound by existing precedents and that they will rely on their own view of the heroes and villains of our time.

Generation Zero slanted the story of the economic crisis rather cleverly. On the one hand, plenty of contributors pointed out that greed and shoddy banking practices had brought about the economic collapse, but the ultimate blame is placed on liberals, bureaucrats and established politicians. And just as Republican politicians and commentators have done for the last seven years, many of the contributors—speaking at the dawn of the Obama administration—pictured a horrible fate under Barack Obama, featuring economic catastrophe and attempts to impose socialism.

This, however, is one of the terrible things about crisis periods: many people will believe almost anything. The United States faces a terrible crisis right now even though our economy is much improved from eight years ago and we are not involved in a large war. And the Republican Party and Donald Trump are poised to take advantage of it. In my opinion, Trump, Bannon, Gingrich, Ryan and the rest will use their opportunity during the next year or two to undo as much of the Democratic legacy as they can—not only the Obama legacy, but that of FDR and LBJ as well.

Meanwhile, however, two other dangers lurk—one of them embodied in my most vivid memory of my own encounter with Bannon.

When I was first exposed to Strauss and Howe I began thinking how their ideas explained the histories of other countries as well, and during our interview, I mentioned that crises in countries like France in the 1790s and Russia after 1917 had led to reigns of terror. Bannon included those remarks in the final cut of Generation Zero.

A second, more alarming, interaction did not show up in the film. Bannon had clearly thought a long time both about the domestic potential and the foreign policy implications of Strauss and Howe. More than once during our interview, he pointed out that each of the three preceding crises had involved a great war, and those conflicts had increased in scope from the American Revolution through the Civil War to the Second World War. He expected a new and even bigger war as part of the current crisis, and he did not seem at all fazed by the prospect.

I did not agree, and said so. But, knowing that the history of international conflict was my own specialty, he repeatedly pressed me to say we could expect a conflict at least as big as the Second World War in the near or medium term. I refused.

Apocalyptic rhetoric and apocalyptic thinking flourish during crisis periods. This represents perhaps the biggest danger of the Trump presidency, and one that will bear watching from all concerned citizens in the months and years ahead. 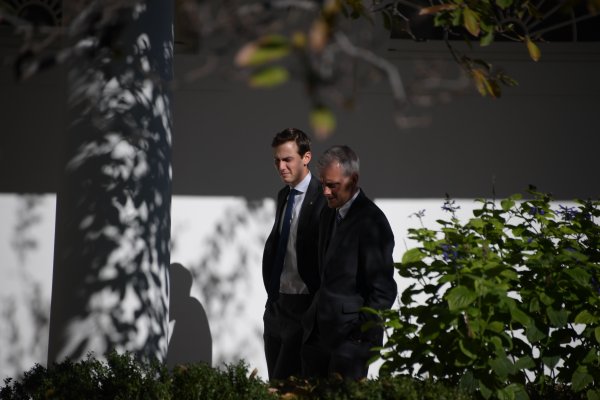 Behind the Law That May Keep Donald Trump's Children From White House Jobs
Next Up: Editor's Pick