Where Does the Fantastic Beasts Franchise Go Next?

The plot of Fantastic Beasts and Where to Find Them revolves around magizoologist Newt Scamander’s (Eddie Redmayne) quest to retrieve the magical creatures that escape from his enchanted briefcase following his arrival in New York City, but the overarching plot of the five-film franchise looks to cover much greater ground.

In one of the movie’s final scenes, it’s climatically revealed that Percival Graves (Colin Farrell) — the head of MACUSA’s Department of Magical Law Enforcement — is actually infamous dark wizard Gellert Grindelwald (Johnny Depp) in disguise. He is subsequently arrested and taken away by the American Ministry of Magic. However, judging by the information already available about the upcoming installments, it’s hard to imagine he’ll stay locked up for long.

It’s already been confirmed that Grindelwald and Albus Dumbledore will appear in (at least) the second film — set to take place in the U.K. and Paris — meaning the pair’s relationship will surely be explored at some point in the series. Here’s what we already know about their complicated history.

In “The Missing Mirror” chapter of Harry Potter and The Deathly Hallows, Dumbledore’s brother, Aberforth, tells Harry, Ron and Hermione the truth of Dumbledore’s past, explaining that Dumbledore met and befriended Grindelwald while living in Godric’s Hollow after graduating from Hogwarts. The two spent several months plotting to start a wizarding revolution before Aberforth confronted them about their plans and a three-way duel ensued. Unfortunately, Dumbledore’s sister, Ariana, wandered into the fray and was accidentally killed, prompting Grindelwald to flee and a deeply remorseful Dumbledore to rethink his life’s path.

J.K. Rowling later revealed that Dumbledore had romantic feelings for Grindelwald during their friendship. “I always thought of Dumbledore as gay,” she said during a 2007 appearance. “Dumbledore fell in love with Grindelwald, and that added to his horror when Grindelwald showed himself to be what he was.”

The author has also stated that although the plot of Fantastic Beasts begins over 25 years after their first duel, the series will delve into Dumbledore’s feelings for his friend-turned-foe. “I can’t tell you everything I would like to say because this is obviously a five-part story so there’s lots to unpack in that relationship,” she explained during a recent press conference. “You will see Dumbledore as a younger man and quite a troubled man — he wasn’t always the sage…We’ll see him at that formative period of his life.”

When Fantastic Beasts begins in 1926, Grindelwald has disappeared after orchestrating a series of terrorist attacks across Europe while Dumbledore is in the midst of his tenure as Hogwarts’ Transfiguration professor. However, the series is set to span 19 years and will conclude in 1945 — which just so happens to be the year Dumbledore famously defeated Grindelwald once and for all.

Hold on to your broomsticks, Potter fans — Fantastic Beasts is going to be a wild ride. 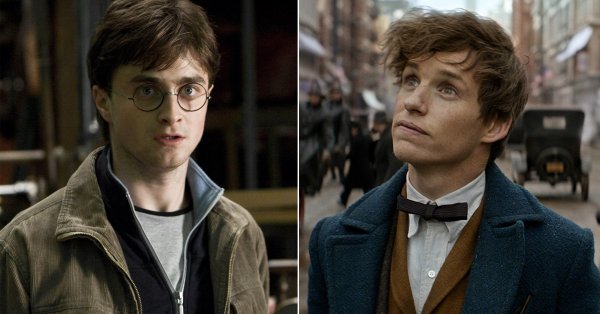