'I Saw This Huge Fireball': A View of Urban Warfare in Mosul

A car bomb explodes next to armored vehicles belonging to Iraqi Special Forces as they advance toward ISIS-held territory in Mosul on Nov. 16, 2016. Troops have established a foothold in the city's east from where they are driving northward into the Tahrir neighborhood.
Felipe Dana—AP
By Andrew Katz

It was more than seven hours into the operation. The harsh sounds of mortars and airstrikes and explosions were abound. Felipe Dana, an Associated Press photographer based in Rio de Janeiro, was in a Humvee embedded with Iraqi Special Forces as they inched deeper into Mosul, the northern city held by ISIS since 2014.

Weeks into the coordinated offensive to unhinge the militants’ grip on Mosul, much of Dana’s focus has been on the Iraqis who have fled fighting near the homes and villages that were recently freed from ISIS.

The fighting on Nov. 16 was heavy but the troops seemed to be doing well. “It’s been very tricky for them,” he says. “They’re learning as well.” The convoy moved at a snail’s pace; along the way, a tank and bulldozer built roadblocks that made it harder for explosive-packed cars dispatched by ISIS to halt intruders.

Dana, who was wearing a flak jacket and helmet, recalled the convoy had been stopped for more than an hour in a recently-secured area; some of the men had climbed out of the vehicles. “We were several Humvees behind the front line, maybe a couple of blocks away, when we just heard this huge explosion,” he told TIME in a phone call.

“It was much louder than the heavy explosions you hear throughout the day. You can clearly tell the difference,” he says. “My reaction was ‘just shoot.’”

In this hellish scene, three special forces were crouched behind the Humvee in front of him. One, wearing a baseball cap rather than a helmet, clutched a rocket-propelled grenade. The flame rose in the sky as smoke and dust fill the air. “I saw this huge fireball from where the explosion was and debris flying everywhere. All sorts of things flying everywhere,” he says. “It takes a while, then things start falling around you.” Dana was later told the car had come from a side street and that several soldiers were injured but none had died.

”It was lucky that I was far and somewhere where I could actually take a photo because it was a split-second,” he said. The tank at the front was disabled by the blast. “We moved to a safe position right after, as we were expecting a second explosion.”

This is Dana’s first time in Iraq. Back in Rio, where he has worked with AP for more than seven years, he usually focuses on social issues: the impact of Zika on local families, gangs and government’s “pacification” program in slums. “It’s very different than here,” he says. “When they go on foot patrol, it’s actually very similar to what happens in Brazil. But we don’t have snipers or car bombs or mortars in our urban conflict, so that changes everything because it’s a whole new set of issues that you have to predict and try to be safe.” 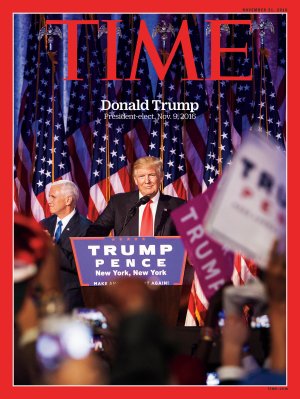 This Is TIME's Cover of President-Elect Donald Trump
Next Up: Editor's Pick