Taylor Swift performs her only full concert of 2016 during the Formula 1 United States Grand Prix at Circuit of The Americas on October 22, 2016 in Austin, Texas.
Gary Miller—Getty Images
By Raisa Bruner

The Les Misérables movie was one of the major cinema events of 2012. It gave stars Anne Hathaway, Hugh Jackman, and Amanda Seyfried the chance to show their formidable vocal chops; brought the lesser-known Eddie Redmayne sharply into the spotlight; and introduced movie audiences to theater actress Samantha Barks, whose powerful performance as Eponine brought viewers to tears.

But it turns out that Barks wasn’t always a shoo-in for the role of Redmayne’s overlooked, unlucky friend. In fact, one of the stars in consideration for the part would have outshone many of the other names in the credits, at least in terms of the size of her fandom. That’s because none other than pop queen Taylor Swift was in the running for the role—and now, thanks to Eddie Redmayne, we know that she definitely didn’t bomb the audition.

“She auditioned for Les Misérables and she was amazing in the audition,” he explained on an episode of Watch What Happens Live. “We got to sing together, which was a big moment for me,” he said, while deflecting any suggestions that their connection was anything other than professional; there have been rumors that they had gone on a date, which he shut down. Of the performance, he said: “She was extraordinary.”

Swift wasn’t the only big name up for the part; Lea Michele, Evan Rachel Wood, and Scarlett Johansson were also in consideration. 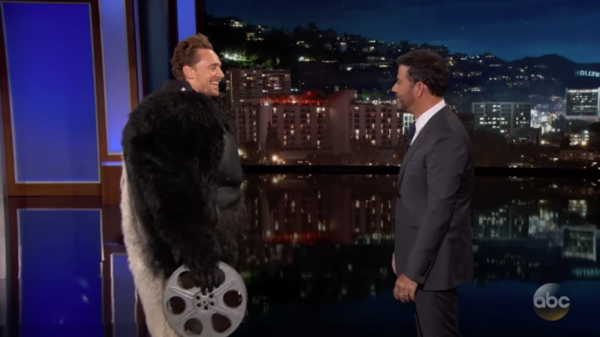 Tom Hiddleston Gets in Character as Kong for Jimmy Kimmel
Next Up: Editor's Pick