When Donald Trump becomes the 45th president of the United States in January, it seems quite likely that he will bring hundreds of potential financial conflicts of interest with him into the Oval Office.

Yet none of it will matter. Instead, incredibly, several congressional oversight committees have said that they will continue to investigate potential financial conflicts of interest between the Clinton foundation and Hillary Clinton’s tenure as secretary of State during the Obama administration. The irony here is beyond strange. It’s also unprecedented.

What is astounding about this is that few seem to care—not the 59 million Americans who voted him into office because they wanted an outsider who has never been involved in politics to run the national government, and certainly not the new GOP Congress that will, instead, continue to investigate potential conflicts of interest of the Democratic presidential candidate who lost the 2016 election.

Trump’s conflicts of interest range from small matters like his investment in a controversial oil and gas pipeline in North Dakota that he may ultimately have to rule on, to large trade issues with China that will affect Bank of China ties to his business organizations that will be managed by his three children.

Presidents are largely exempt from oversight from Congress on matters of financial conflict of interest, and the GOP Congress wouldn’t launch investigations of him regardless. The FBI tilted in his favor in the run-up to the presidential election, so it’s unlikely it will take an interest in this subject either. There isn’t anyone left on the playing field in Washington to investigate any of his potential conflicts of interest.

Trump didn’t release his tax returns during the presidential campaign, and he has shown no inclination to be any more transparent about potential financial conflicts of interest once he becomes president. Despite intense media pressure on Trump to be more forthcoming about his business dealings and how they might intersect with the White House, Trump has simply stonewalled. That isn’t likely to change.

Past presidents have placed their financial holdings in blind trusts and released their tax returns each year to show good faith to the American public. Trump has said he’ll simply allow his children to continue to run his varied financial interests while he’s president, and isn’t likely to allow anyone to scrutinize the inner workings of his many and varied businesses while he’s president.

His campaign personal disclosure form lists more than 500 legal business entities, as well as 21 large financial properties that he says are worth more than $50 million each. Many of the decisions he makes as president will undoubtedly affect those small and large financial interests, yet there is no mechanism that can compel him to be more transparent about how those interests might overlap—and there are no federal investigative bodies either in Congress or his own administration to conduct any meaningful oversight. The media will continue to investigate, of course, but Trump has convinced much of America that the media can’t be trusted.

Take just two examples of how this might work once he’s in office. Trump is a small investor in Energy Transfer Partners, which is one of the business interests behind the Dakota Access Pipeline that has spurred dozens of protests. The decision on the Dakota pipeline could very likely be made from the Oval Office, in favor of his investing partners. It is an obvious and clear financial conflict of interest, but Trump has shown no indication that he will avoid such conflicts—and there is no public call for him to divest his political decisions from such financial interests.

At a larger scale, the state-run Bank of China has a financial interest or stake in at least two of Trump’s large real estate properties. During the campaign, Trump said he would consider trade sanctions on China in an effort to promote American business interests. Should he follow through on those campaign threats, triggering reciprocal actions by the Chinese government, those Bank of China loans to his business interests will be squarely in the crosshairs.

No one—other than the media—has made an issue out of Trump’s potential financial conflicts of interest as president. And in yet another level of bizarre political irony, one of the central elements of Trump’s presidential campaign was a populist demand from his followers to put Clinton in jail for perceived conflicts of interest between the Clinton foundation and her time as secretary of State. “Lock her up” was a central theme of the Trump campaign, one that he often repeated from the podium. But do such potential financial conflicts interest extend to Trump when he becomes president? Apparently not.

The sheer irony of all of this doesn’t stop at the White House, either. The loudest, most vociferous cheerleader at many of those Trump rallies—where his populist movement was demanding that Clinton go to jail for any financial conflict of interest transgressions while she was serving as secretary of State—was former New York mayor Rudy Giuliani. Like Trump, he was a willing and eager political cheerleader for this demand that Clinton be investigated and jailed. Both he and Trump have said they would still consider appointing a special prosecutor to pursue Clinton.

Giuliani is now the leading candidate to become secretary of State in the Trump administration. He has any number of business ties that might come under intense scrutiny should he, in fact, be named to that position.

Giuliani has dismissed the questions of any potential conflicts of interest that might intersect with the State Department. “I have friends all over the world,” he told the New York Times. He’s said his financial dealings, which ranged from contracts with the government of Qatar and the huge Canadian company behind the Keystone XL pipeline to paid speeches to groups with financial interests in countries that he would deal with as secretary of State, aren’t the same as the charges that he and Trump leveled during their “lock her up” campaign tour.

And yet it is precisely the same thing. The question, at least for the foreseeable future, is whether anyone beyond the media will ever show any interest in the subject. Congress hasn’t shown any interest. The FBI isn’t likely to look into it. Trump isn’t compelled by ethics laws to list potential conflicts of interest when he becomes president. So who’s left to conduct oversight? 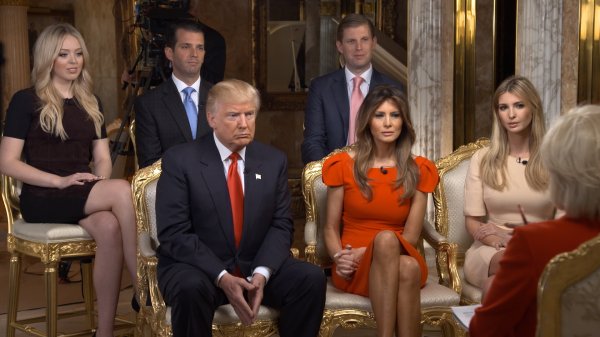 What the Founding Fathers Said About Presidential Children and Power
Next Up: Editor's Pick