A new study has shown that most of the top corporations in the U.S. don’t guarantee paid parental leave, and often adopt policies that are discriminatory and exclusionary to certain groups of workers.

PL+US, a campaign organization working to raise awareness of the importance of paid parental leave in the U.S., recently released their report titled ‘Forging Ahead or Falling Behind: Paid Family Leave at America’s Top Companies‘. The report investigated the paid family leave policies across the U.S.’s 60 top employers, but PL+US was only able to confirm the policies at 29 companies, indicating the lack of transparency surrounding this issue.

Deloitte, Ernst & Young and Bank of America were found to be the standouts and provide 16 paid weeks off to mothers, fathers and adoptive parents. This was a departure from other companies, such as Ford, General Motors and Starbucks, which offer no paternity leave. The report highlighted that a significant number of the companies in the study were discriminatory against fathers, adoptive parents and low wage employees in their parental leave policies. Walmart, for example, only has a policy for its salaried employees.

Along with several other groups advocating for paid parental leave, PL+US contributed to an open letter to America’s top employers on Wednesday, saying that “access to paid family leave is critically important to our families, our health, and our economy.” During the recent presidential election, now President-elect Donald Trump hinted that paid maternity leave could be a reality in his administration, while newly elected senators including Tammy Duckworth and Kamala Harris ran on platforms advocating the importance of this issue to both women and families. 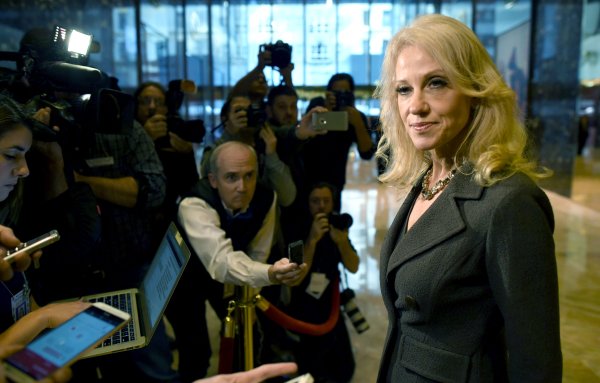 Kellyanne Conway Says Motherhood May Keep Her Away From the Trump Administration
Next Up: Editor's Pick