Review: 'Watch Dogs 2' Breaks as Many Things as It Fixes

Watch Dogs 2, out now for PlayStation 4 and Xbox One, almost lost me so many times I stopped counting. A few examples: The gimmicky police/gang swatting tactics; the money that grows on people instead of trees; the climbing puzzles always half a block from a scissor lift vehicle; the folks who’ll call your headset though you’re standing right beside them; the anticlimactic ending with its all but straightjacketed shootout; the way you’re really a magical superhero masquerading as a hacker.

That would be something, by the way, if the protagonist turned out to be an alien from another planet gifted with crazy abilities, or just a dude with paranormal powers. But no, we’re meant to understand the character we play in Ubisoft’s open world hack-a-palooza in abstract: an elite cybercriminal amidst fellow anarchists fomenting a populist revolt. That he can siphon endless dollars from individual passerby without fear of detection, ghost any Internet-of-Things onramp with a CPU, or zombify opponents by making their cellphones ring — all in seconds per a few button taps — is just cotton candy for the carnival ride.

There’s something unsettling about some of that, a maybe unintentional (but unmissable) point that’s as insidious as the cartoonish adversaries the game throws up — the Orwellian corporate colluders with invisible jackboots on the necks of the nintety-nine percent. Is it at all ironic that the game’s protagonist wields power more effectively and viscerally than the game’s laughably inept overlords? That to win, players have to hack and peep and very likely maim or kill their way to victory? That as far as narrative dissonance goes, it’s just as creepy when you’re casually surveilling soulless algorithms disguised as individuals, reading their texts or listening to their phone calls, as it is nonchalantly offing them?

I’m just saying. The view from 30,000 feet is that you’re a white hat cyber-hero prowling San Francisco’s storied streets putting the world to rights by getting the vox populi its vox back. Stay at that comfortable cruising altitude and you’ve got a game that mostly works. It’s certainly better than the 2014 original with its forgettable hero and potboiler cyber-thriller plot. Watch Dogs 2 steps up the story, trades the last game’s self-important blather for charming for-the-lulz irreverence and makes the game’s reason for existing — using hacks to play enemies and environs off each other — feel almost jazz-like.

Maybe you’re after a bank of servers nestled in the basement of a corporate complex. You’ll steal past the mini-map’s “danger” threshold, then slink between covers spots like desks, potted plants and wall corners. In addition to bopping from security cam to cam (as in the last game, based on line of sight), you can now deploy a two-wheeled robot or quadcopter drone from your hiding spot. The former becomes your proxy in hard-to-reach spaces, skulking through ventilation shafts to reach wall panels that unlock essential routes. The latter can’t really hack anything, but lets you reconnoiter battlefields, marking targets so you can decide how best to proceed. They’re essential additions to the game’s playground puzzles, and superb examples of design iteration that’s both meaningful and airtight. When it feels like you’re hitting tactical synchronicity off improvised solutions to surprises as they crop up, it’s because you are.

The game’s powers are more of a mixed bag. Most of what you could do in Watch Dogs resurfaces with twists that both enhance and lessen the experience. You can still disrupt city traffic and meddle with electrical output, distract individuals by futzing with their mobile devices, and tinker with timed explosives and shock-inducing gadgets. But you can also summon law enforcement or gang members to harass your targets, feeding either side fake data, which prompts them to arrive moments later to storm the scene. The latter upends the way scenarios unfold, sometimes for the better, sometimes for the worse.

Missions in Watch Dogs 2 are like poking ants in an ant farm, little hubs of intersectional activity you enter into after motoring (or warping) to a location. Watching what happens when you lob permutations at all the weaponized variables is half the fun. Mess with the doors in a building to attract someone’s attention. Or shock curious guards unconscious by planting lures on zapper traps. Or drop IEDs from your remote control drones to stir up parts of the hive. Or sick outside assailants on an area’s guards, and watch all hell break loose.

Sometimes that’s a grand thing, conjuring the sort of surprises that put smiles on the faces of emergent play buffs. The trouble lies with one in particular: You can summon the cops or gang members ad infinitum until they’ve wiped an area clean. All you have to do is stay out of sight, wait for your powers to recharge and push some buttons.

The incentives feel wrong there, to say nothing of the logistics. Why don’t the police or gang members wise up to these invitations to the slaughter pen? Wouldn’t the San Francisco P.D. or local criminal element demur after a spate of crank calls? Wouldn’t it be more interesting to limit how many times players could do this in the game, or at least per encounter? As it is, you can cruise through the campaign’s battles on the highest difficulty setting spamming the social engineering options. That’s a problem, and the opposite of the sense of tactical synchronicity I mentioned earlier.

It hasn’t helped that at launch, Ubisoft disabled the game’s “seamless multiplayer” because of bugs. It’s a shame, because the new “Bounty Hunter” mode sounds like a blast: wreak havoc in your world, and the game will summon up to three online opponents, who’ll dynamically join with the police to hunt you down for experience points. You can up the stakes in this mode by placing a bounty on yourself and calling for assistance from another player. Once this is back, assuming it works as advertised, it could be one of the strongest arguments toward a purchase.

For now, what looks at first like a few hopeful steps forward for this fledgling franchise turns out to be too much shuffling sideways. The protagonist is more interesting, the writing and voice acting vastly improved, and the tactical components more intricate and differentiated. But it’s too easy and tempting to exploit the most powerful among the latter, to play ants off ants ad nauseam, or just go in guns-a-blazin’, a blithe and hypocritical madman. It may be time to try some alternate playground constraints, say de-weaponizing the experience, or adding more alluring stealth incentives. At minimum, cops and gangs need serious nerfing. Enhancing player agency isn’t a bad thing, but it’s also not everything. 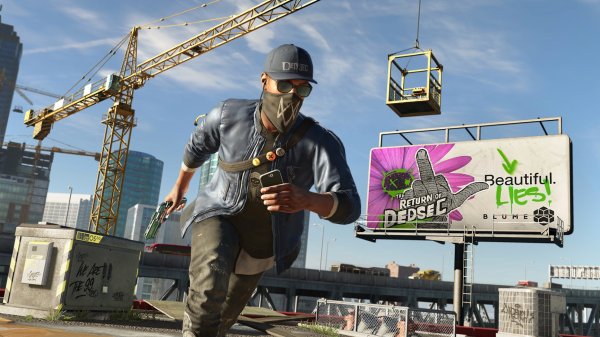 'Watch Dogs 2' Multiplayer Is Mostly Broken at Launch
Next Up: Editor's Pick