During an appearance on Fox News on Wednesday night, pro-Trump advocate Carl Higbie drew a shocked reaction from host Megyn Kelly during a discussion of the possibility that President-elect Donald Trump might support making Muslim immigrants to the U.S. “register.” In an apparent attempt to portray the idea as unsurprising, Higbie noted that there was precedent for the U.S. government registering residents according to factors like race, religion and region.

“We did it during during World War II with the Japanese, which, call it what you will—,” he began, before Kelly interrupted him.

Kelly was only partially correct—which is why knowing the history of that internment matters so much. The Supreme Court did rule that the internment of Japanese-Americans during World War II was constitutional, and the ruling does still technically stand, as it has not been revisited in the years since. It is feasible that an Administration determined to repeat such an action could use that history as a justification. At the same time, however, that wartime action has officially been acknowledged as a dark stain on America’s legacy. Knowing the facts of what happened makes it all the more clear why the suggesting of repeating such a time is so shocking.

Almost immediately after Japan attacked the United States at Pearl Harbor on Dec. 7, 1941—75 years ago next month—many Japanese-Americans found that their neighbors and representatives quickly turned against them, lumping them in with the Japanese in Japan who were now an enemy, fearing that homeland ties would lead them to sabotage or treason.

“A superpatriot chopped down four Japanese cherry trees along the Tidal Basin in Washington; the Tennessee State Department of Purchasing declared ‘open season on Japs, no licenses required,’ and an elderly Japanese man and wife were shot to death in their beds in El Centro, Calif.,” TIME later reported. “As American military losses increased in the Pacific and American morale dipped at home, rumors of Japanese-American fifth-column activity raged along the Pacific Coast. The very fact that no sabotage had occurred—or ever did occur—was viewed with alarm. ‘It is a sign that the blow is well organized,’ warned Pundit Walter Lippmann darkly, ‘and that it is held back until it can be struck with maximum effect.'”

Within days after the attack, the FBI and other authorities had rounded up thousands of “enemy aliens.” The U.S. was home to, by TIME’s 1941 count, nearly 79,642 native-born Americans of Japanese descent, who watched the round-up in panic: Would Americans know the difference between them and the enemy?

The answer was, sadly, no.

In February of 1942, President Franklin Roosevelt signed the infamous Executive Order 9066, which authorized the military to designate certain regions as “military areas” from which “any or all persons may be excluded.” It was, as TIME summed it up, “not martial law—not quite.” Much of the West Coast, home to a large Japanese population, was promptly declared just such a military area, and people with Japanese ancestry were the ones to be excluded.

Support for the idea was, at high levels, fairly widespread. (Notable exceptions were Sen. Robert Taft and the American Civil Liberties Union, who spoke out against it.) One of the Army officers who was responsible for the relocation was even given the Distinguished Service Medal that November for the work he had done to oversee the evacuation of more than 100,000 Japanese people and Nisei—the American children of Japanese immigrants—to ten “permanent projects” in the Western half of the U.S. under the charge of the War Relocation Authority. The camps were cramped and unprepared to house large populations during cold winters, and the property left behind by the evacuees was often essentially looted by those who had once been their neighbors.

Most of the people subjected to this forced relocation to the camps were American citizens. (Among those interned were future Secretary of Transportation Norm Mineta and Star Trek actor George Takei.)

In 1944, in the case Korematsu v. United States, the Supreme Court heard the case of Fred Korematsu, an Oakland native who attempted to resist the relocation, only to be convicted of breaking military law. The court held that his conviction could stand, and that the evacuation order—due to the extraordinary circumstances of war—was constitutional. (In a dissent, Justice Robert H. Jackson—who would later serve as prosecutor in the Nuremberg trials—wrote that the decision was a “loaded weapon, ready for the hand of any authority that can bring forward a plausible claim of an urgent need.”)

It did not take very long after the war for the internment of Japanese-Americans to go from being seen as a necessity to what TIME in 1961 called “an ugly footnote in American history,” given the admirable service of many Japanese-Americans who fought for the U.S. during the war and the complete lack of concrete evidence that the population posed any actual danger.

Choose any one exclusive book from the TIME History collection with your paid subscription to TIME.

In 1980, the Commission on Wartime Relocation and Internment of Civilians was established by Congress in an attempt to come to terms with what had happened. The hearings conducted by the commission gave those who had endured the camps a chance to tell the nation what they had lived through: poor medical care and malnutrition, the separation of families, and the total loss of an estimated $400 million in property—of which they were repaid only $38.5 million by the government.

The commission also examined a question with an answer that was only too obviously racial: if the reason for the camps was wartime necessity, why hadn’t Italians and Germans received the same treatment?

In 1983, the commission issued its report, stating for the record that:

And, shortly after, Fred Korematsu was officially cleared. Using materials from a Freedom of Information Act request—documents that showed that the FBI knew there was no serious evidence that the Japanese population of the U.S. was helping the enemy—he had returned to court. (Later, in 2011, the Solicitor General’s office confessed confessed to having erred in withholding information that would suggest that there was no real threat.) The Justice Department did not specifically admit having done wrong, but decided to support Korematsu’s claim that his original conviction should be overturned.

As TIME pointed out, the Supreme Court precedent would still stand, but the judge who cleared Korematsu’s conviction declared in her ruling that, in the words of the report of the Commission on Wartime Relocation, “Korematsu lies overruled in the court of history.”

And, she added, the still-standing Korematsu ruling was one that all Americans ought to remember, especially in times of national turmoil:

In 1988, President Reagan signed the Civil Liberties Act, which offered an official apology and provided restitution of $20,000 to every survivor. “No payment can make up for those lost years,” Reagan said during his remarks about the bill. “Here, we admit a wrong.”

Last December, Donald Trump told TIME that he could not say whether he would have supported the internment of Japanese-Americans. Though he said he did not like the idea, he was not sure what he would have done at the time, given that, as he said then, “war is tough.” 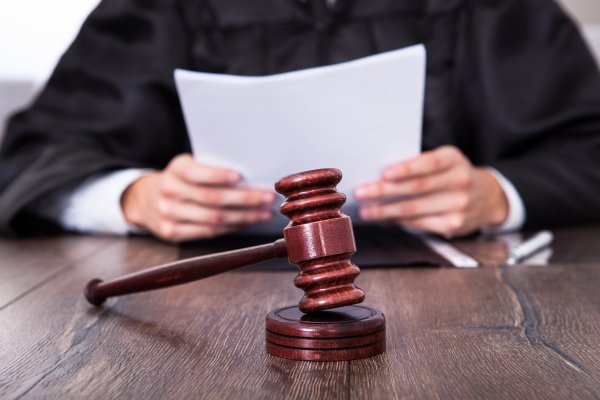 Judge Defends 60-Day Sentence for Father Who Repeatedly Raped His 12-Year-Old Daughter
Next Up: Editor's Pick