Inside the Halting Fight Against AIDS

Very little about Dr. MarkAlain Dery could be described as ordinary. The HIV specialist at Tulane University in New Orleans favors three-piece suits and French-cuff shirts to white coats, khakis and Crocs. Under his shirtsleeves, his arms are a canvas for tattoos–a fleur-de-lis, an old-school radio microphone, a sexy portrait of his wife. Standard modes of transportation aren’t for him, either. Stashed in the corner of his office is the four-wheeler he uses to get around town: his skateboard.

Dery’s penchant for iconoclasm goes beyond appearances. As director of the Tulane T-Cell Clinic–an HIV patient center deliberately named without those three stigma-filled letters–Dery is testing an approach to disease management that’s mostly unheard of at HIV clinics in the U.S. Instead of simply offering HIV tests from a storefront shop in a high-risk neighborhood, for instance, the T-Cell Clinic operates out of a federally funded community wellness center at Tulane. T-Cell takes a whole-health approach to people with the virus, meaning that people who test positive for HIV are offered immediate treatment and given help to pay for it. Likewise, if those who happen to have HIV need routine medical care, they can visit the health center with the comfort that there are HIV experts on hand, should they need to see one.

It’s a model that’s seen success in a handful of other cities, most notably San Francisco, but the challenges in New Orleans are unique–and great. State and local laws discourage widespread adoption of the most basic HIV-prevention strategies, such as condom distribution in schools, safe-sex public-health campaigns and clean-needle exchanges. Meanwhile, high poverty and low education rates have pushed health needs to the bottom of social and civic priorities. Add to that the economic devastation following Hurricane Katrina, which wiped out health resources, and it’s no surprise that New Orleans has the third highest rate of new HIV infections in the U.S.

Still, for all the challenges, Dery says there are some early signs of hope. New Orleans is one of 11 cities in the U.S. and dozens around the world that have committed to the ambitious goal of eradicating HIV by 2030. Getting there begins with the simple but critical step of making sure the vast majority of people living with HIV are aware they have the disease. Next, provide HIV-positive people with drugs, and monitor them until their viral levels are so low as to be undetectable. The last goal is the hardest to quantify: to eliminate stigma around HIV and discrimination against those who have it.

Enormous progress has been made in the U.S. in fighting the AIDS epidemic that at its peak killed 50,000 people in a single year. Since the late 1990s, deaths from HIV have dropped by one-third. Still, while some cities have seen dramatic drops in infection rates and deaths from HIV, the number of new people contracting the virus remains stubbornly high in certain swaths of the country because of resistance to safe-sex campaigns and cuts in government health care services. “There’s no sugarcoating it that in the South, we take one step forward and then five steps back,” says Dery.

That’s why his clinic pushes for testing anyone who comes in for any health issue, for instance, as well as making sure that anyone who tests positive for HIV is not given an appointment for some later date but is instead brought to the clinic and given anti-HIV medications on the spot.

It’s what Dery thinks will work. It did in New York City and San Francisco, after all. But such dramatic progress wouldn’t be possible anywhere if it weren’t for breakthroughs in drug treatments.

Just 30 years ago, an HIV diagnosis was a death sentence. Today people who start taking the latest class of antiretrovirals can often bring down HIV levels in the blood to undetectable levels. At that point, it becomes highly unlikely they would ever spread HIV during sex. Doctors have also learned that the same drugs can protect uninfected people as well, preventing them from getting HIV in the first place. Now health centers across the country, including the T-Cell Clinic, offer the preventive drug Truvada to uninfected people who are at high risk. This treatment, called pre-exposure prophylaxis, or PrEP, has become a cornerstone of most successful strategies to reduce HIV infections, because to control the epidemic on a population level–as opposed to simply treating people once they’re sick–prevention is critical.

With other infectious diseases such as measles and polio, vaccines serve this purpose, but since an effective HIV vaccine doesn’t exist, these drugs are the next best thing for throwing up roadblocks to a virus that is continuously on the hunt for new hosts. The fewer hospitable homes a pathogen like HIV can find, the more quickly it’s wiped out.

It’s insights like these that prompted San Francisco, the nexus of the AIDS epidemic during its peak–and cities like it–to toy with the bold idea of eradicating HIV from within its borders entirely. Experts there–including those from the medical community as well as patient advocates and even political leaders–realized that to get to zero, it wasn’t enough to distribute the medicines. They would have to go out of their way to deliver them to those who need them most.

HIV advocates in San Francisco established universal free testing in hospitals; they provide same-day appointments with specialists, sometimes going so far as to put patients into cabs to get them to the nearest clinic; and perhaps most important, they provide people with a starter supply of HIV drugs. Most patients take the first dose before leaving the clinic.

In order to reduce attrition, case managers ensure that paying for drugs isn’t prohibitive. They also keep tabs on all new patients to make sure they’re taking their medicines and, hopefully, getting viral loads so low that they become undetectable.

Dery is hoping that what worked so well in San Francisco–there are now entire zip codes with no new infections–can also work in New Orleans.

The first hurdle is helping people learn if they are infected or not. “Testing, testing, testing, is single-handedly the most important thing in reducing new infections,” Dery says. New Orleans has the highest rate of people infected with HIV who are undiagnosed–77%–because testing isn’t as available there as it is in other parts of the country; nationally, that ratio is 1 in 8.

Pairing testing with treatment for people who are HIV-positive is the next step. That’s where cities like New Orleans face unique challenges. Stigma against HIV remains high–that’s why the Tulane clinic carefully avoids the term HIV in its name, opting instead for a medical term for the cells that get attacked by the virus.

“In some communities, stigma against HIV and homophobia definitely come into play,” says Dr. Nicholas Van Sickels, medical director of CrescentCare, a clinic that receives federal funds to provide HIV treatment and other health care. In smaller cities throughout the state, he says, “clients come in the back door for HIV services because they know if they come into the clinic, people are watching and they’ll see.” (For its part, T-Cell tries to control for this by its location inside the Tulane wellness center.)

Nearly 70% of New Orleans’ new infections are among young African-American men, with most transmission occurring from men having sex with men, making New Orleans’ problem especially daunting. African Americans often don’t have access to health services, and discussing HIV risk presents an even greater challenge among young males because of strong cultural biases against homosexuality. That may explain why young black men make up only about one-quarter of people taking PrEP.

Poverty also hampers consistent care: many who need drugs and testing the most can’t afford the bus ride to Tulane or any other health clinic for an HIV test. “If I can whittle down the barrier to controlling HIV to one word, it’s poverty,” says Dery. He offers bus tokens and child care at the clinic to make visits as inexpensive for patients as possible.

Louisiana has the added burden of having the highest incarceration rate in the country; while HIV rates are about three times as high among prisoners as in the general population, Louisiana prisons are discouraged from distributing condoms, exacerbating the problem.

Laws in the region also work to perpetuate misunderstanding and discrimination. Sex education in schools isn’t mandated, and when it is taught, abstinence is the strategy pushed for avoiding pregnancy, STDs and HIV. Public-health groups can’t provide condoms in schools. And if police officers in New Orleans find condoms during a search of someone suspected of prostitution, they could in theory be used as evidence in the event of an arrest. It was enough to prompt some sex workers, transgender women and other people at high risk of infection to engage in unsafe sex without condoms out of fear of getting arrested.

For these reasons, some HIV advocates in the state are more hesitant than Dery to try the test-and-treat model that worked so well in the Bay Area, in no small part because if people don’t take the medications as directed, for as long as directed, the downstream consequences can be dire. Some experts worry such lapses will fuel the rise of resistant HIV that can’t be treated with the drugs that currently work so well.

That’s why the state is concentrating its efforts on those who do get diagnosed and making sure they don’t drop out of the HIV-care program. The Louisiana health department has expanded the team of caseworkers who go to people’s homes if they don’t come back for their appointments to find out what’s preventing them from continuing their care.

There are encouraging signs that such efforts are beginning to pay off. While the overall number of new HIV diagnoses hasn’t changed much yet across the state, the percentage of people who are diagnosed and being treated has increased from 81% in 2014 to 86% so far this year. That’s leading to reduced virus spread as well–two years ago, 70% of people living with HIV controlled their virus to below detectable levels; in a year, that increased to 79%.

“We are seeing some successes and see more people getting into care more quickly after they are diagnosed, getting treatment and staying on treatment to keep their virus suppressed,” says DeAnn Gruber, director of the STD/HIV program for the Louisiana department of health.

It’s a start. And while New Orleans’ HIV rates may take a bit longer to come down, Dery and the city’s HIV experts are confident that they will–eventually. “We are particularly motivated because we are handicapped by all the social determinants that keep HIV rates high,” he says.

“I see us as the underdogs,” Dery continues. “But sometimes the underdogs play a little harder and more passionately. So yes, I think we could get to a point where we are reaching zero new infections. The question is not if but when.” 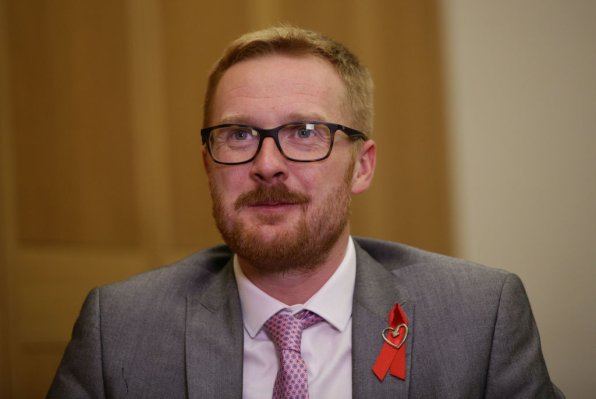 Why This British Lawmaker Decided to Come Out as HIV-Positive in Parliament
Next Up: Editor's Pick