The winners of the 2016 National Book Award were announced on Wednesday night in Manhattan. Here’s who took home prizes.

The novel was a long time coming. “Slavery is such a huge topic–I didn’t feel up for it emotionally,” the 47-year-old novelist told TIME in August. “Every couple of years I would go back to the idea and look at my page of notes and maybe add a line.”

2. For nonfiction: Stamped From the Beginning: The Definitive History of Racist Ideas in America, Ibram X. Kendi. Kendi, an professor of Africana Studies at the University of Florida, offers a bold proposition in his work of intellectual history: Barack Obama and Abraham Lincoln might be racist. Stamped from the Beginning offers an intricate look at the history of race in the U.S., arguing that many well-meaning American progressives inadvertently operate on belief systems tinged with a racist heritage.

“So many prominent Americans, many of whom we celebrate for their progressive ideas and activism, many of whom had very good intentions, subscribed to assimilationist thinking that has also served up racist beliefs about Black inferiority,” Kendi writes in the book, as excerpted by the Washington Post.

3. For poetry: The Performance of Becoming Human, Daniel Borzutzky. Borzutzky grew up in Pittsburgh but has his roots in Chile — a cultural bridge that materializes in his collection The Performance of Becoming Human. He is frank in exploring these themes: the titular poem begins with the line “On the side of the highway a thousand refugees step off a school bus and into a sun that can only be described as ‘blazing.'”

4. For young people’s literature: March: Book Three, John Lewis. Lewis is today a Georgia congressman, but half a century ago, when the 6th Street Baptist Church in Birmingham, Ala. was bombed, he was a prominent civil rights activist. March: Book Three is his recollection. The Los Angeles Times reports that Lewis cried upon receiving the National Book Award on Wednesday night, recounting growing up in poverty in Alabama, unable under Jim Crow to enter a whites-only library. 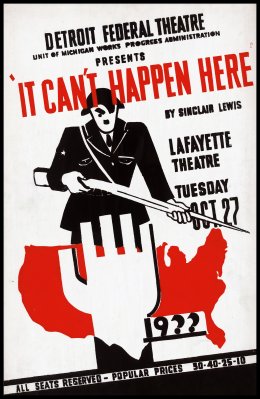 The Book People Are Saying Predicted Donald Trump's Rise, as Reviewed in 1935
Next Up: Editor's Pick