China Is Using Tourism to Hit Taiwan Where It Really Hurts

People gather the watch the sunset over Taipei. The Elephant Mountain hiking trail attracts photographers and tourists whenever there's a chance of a nice sunset
Craig Ferguson—LightRocket/Getty Images
By Nicola Smith / Taipei

Since the 1950s, the National Cultural and Creative Gift Center, which sells traditional handicrafts to tourists in the heart of Taiwan’s capital Taipei, has been a guaranteed money-spinner. Now its managing director, Teddy Tang, casts a resigned glance over the sales charts, which show how profits plummeted by a stark 55% from April to September.

The start of the decline coincided with the May inauguration of President Tsai Ing-wen, leader of the Democratic Progressive Party (DPP), which advocates a strong Taiwan identity and with which Beijing has frozen relations. For the ensuing five months, the number of mainland Chinese tourists to Taiwan fell by 27.2% year on year. From Oct. 1 to 18, traditionally a popular season for mainland tourists, the shortfall hit a startling 47.8%.

Tang, like many in the tourism industry, cannot conceal his worry about the drop in Chinese tourist numbers and his falling profits.

“There is a direct link between the two,” he says. Last week only a small scattering of tourists browsed through the jade artifacts, calligraphy paintings and handmade vases in the four-story shop. “The Chinese are the ones who purchase the most. They buy a wide range of things that are based on Chinese culture,” says Tang. “Other tourists, like the Europeans and Americans, only buy small objects.”

The store’s sales slump is reflected in the tourist industry across the country, where hotels, bus companies, restaurants and tour guides are suffering. Taipei has accused China of turning off the flow of its financially lucrative tour groups after Beijing, which views Taiwan as a renegade province, cut official contacts with President Tsai over her refusal to publicly endorse the so-called 1992 Consensus. Though there are different interpretations of what it would mean, that consensus, forged by Taiwan’s previous Kuomintang (KMT) government, crucially acknowledges that there is “one China.”

Taiwan President Tsai Ing-wen, center, gestures during National Day celebrations in front of the Presidential Palace in Taipei on Oct. 10, 2016. Relations with Beijing have deteriorated under Taiwan's first female President, whose China-skeptic party, the DPP, took office in May after a landslide victory over the KMT
Sam Yeh—AFP/Getty Images

Francis Hu, head of political science at Taipei’s Tunghai University, says the tourism industry is particularly vulnerable to Chinese political pressure as Beijing has little to lose. “It’s part of the grand strategy of tightening the screws on Taiwan,” he says. “Beijing wants the Tsai administration to make concessions on the 1992 Consensus.”

Chinese citizens require permission from their government to go to Taiwan, making it easy for Beijing to both squeeze the numbers and deny that it is doing so. China blames a horrific bus crash in Taipei in July, caused by a suicidal driver, and killing 24 Chinese tourists, as a major reason for the decline.

Tang’s store has invested in online sales to cushion the blow, but others are struggling to cope. On Sept. 12, up to 10,000 tourism industry workers protested in heavy rain, holding signs saying, “No Jobs, No Life!” and “We Need to Survive.” They blamed Tsai, not Beijing for their woes.

“The government should say yes to the mainland,” said a frustrated hotel owner from Taitung in southeastern Taiwan who called herself Ms. Yang. “We just want to feed our families!”

Ringo Lee, spokesman for the Travel Agent Association, says millions of jobs depended on the business generated by mainland tourists. “So many companies have been impacted. Many tour guides and bus drivers lose their jobs, many restaurants and hotels have closed,” he says. Lee says that his own high-end tour company, TaiwanXing, has suffered 70% losses and jobs may be on the line.

However, not everyone is unhappy. Many see the crisis as an opportunity to reform an industry too dependent on Chinese tour groups that slash prices so much that local operators can barely make a profit anyway. Others are simply relieved that the crowds have gone. Last year, residents of the pretty southern town of Sizihwan threatened to seal themselves off after being swamped by some 4,000 mainland tourists a day.

This summer, when numbers began to fall, wry Taiwanese netizens created a spoof ad campaign that featured photos of tourist hotspots with the caption, “Without Chinese tourists, it’s now possible to relax in the most popular destinations.” It was denounced in China as bigotry.

For Claudius Petzold, a German professor at Taipei’s Fu Jen Catholic University who worked as a tour guide for five years, the problem lies not with the Chinese, but with mass tourism on a small island already crowded with 23 million people. Petzold became frustrated with hotel discounts only being offered to Chinese groups, and with tour buses dangerously clogging narrow roads and ruining beauty spots.

“They opened [Taiwan] up too fast, only counting on a small margin with mass tourism, and the island is too small,” he says.

The tourism downturn is an additional economic headache for the Tsai administration, which inherited a weak economy with low and stagnating wages, increasing income inequality and languishing exports. The government has identified technology start-ups, investment opportunities in infrastructure and software development, and recruiting foreign talent as key to stemming the economic slide. It recently announced a $9.5 million emergency fund to boost the tourism sector. The Tourism Bureau has pledged to ease visa processes and create slick marketing campaigns.

Still, industry chiefs prefer the easier option of mass Chinese tourism to the effort of tapping into new markets. “It’s such a hard job,” says Lee of the Travel Agent Association. “We had to do it 10 years ago with China, and now we have to start all over again.” 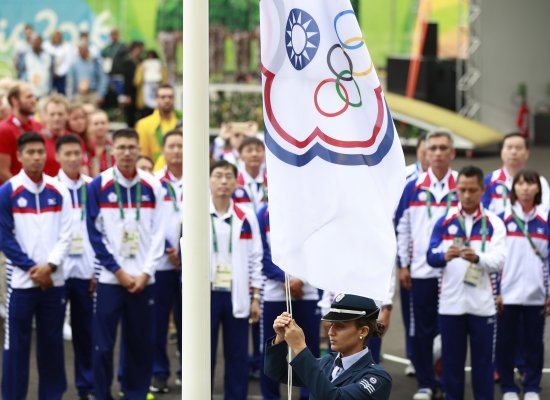 Taiwanese Compete to Design New Flag for Tokyo Olympics
Next Up: Editor's Pick