Donald Trump has an uphill battle to convince other world leaders that he knows what he’s doing. But there are important U.S. relationships that, for better and for worse, the next President might actually be able to improve. Here are 5 of the most important:

1. Russia
Let’s begin with the most obvious. The “Russia Reset” was the single biggest foreign policy failure of the Obama administration. Obama and his Secretary of State Hillary Clinton failed to recognize that there’s little upside in fighting with Russia over issues that Russians care much more about than Americans do, and that conflict with Russia will produce nothing of value for the United States. That became a defining narrative of the 2016 election, a full four years after Hillary left the State Department.

Putin now gets in Trump a man who believes that America should do less in the world, who believes that American exceptionalism isn’t worth a cent more than what it can get on the open market. Trump will implicitly cede Crimea to Russia and back off the Obama hard line on the rest of Ukraine. Trump will be praised for taking the edge off a relationship that was headed toward a dangerous escalatory spiral, especially in cyber space.

2. Syria
Many of the political points Trump can and will score early on will come not from fixing intractable global problems, but by walking away from fights that can’t be “won.” Trump knows it’s now impossible for the U.S. to put Syria’s pieces back together and evict Bashar Assad, given the kaleidoscope of interests and actors already on the ground. Instead, Trump will say that he cares only about defeating ISIS and promise to work tirelessly to that end. (When you can’t reach the goal, move the goalposts.) This is yet more good news for the Russians, since it allows Moscow to continue propping up Assad, its most loyal ally in the region. Not that this is at all a bad outcome—it will put an end to the fighting more quickly, followed by a fragile peace.

3. Turkey
Another strongman that will be pleased to see President Trump in the Oval Office is Turkish President Recep Tayyip Erdogan, who has already declared the Trump presidency a “new era” of American democracy. In July, Trump made clear his belief that Erdogan was justified in his post-coup crackdown on journalists and academics (more than 40,000 people have been detained or arrested to date), a welcome change of pace from the chorus of Western leaders denouncing him. Trump may well extradite Erdogan’s mortal enemy, Fethullah Gulen, a move Obama has resisted.

Turkey’s relations with Russia have thawed considerably following last year’s Turkish shoot-down of a Russian air force jet. Given Trump’s increased cooperation with both Putin and Erdogan, it’s possible that improving relations between the two neighboring powers can evolve into a three-way discussion. And with that, Donald Trump can become a peacemaker, or at least a stabilizer, in a volatile region.

4. Japan
Things get trickier with existing allies who Trump has repeatedly thrown under the bus during his “America First” campaign. Trump famously suggested that the U.S. would be better off if Japan had its own nuclear weapons instead of outsourcing its security to Americans. His world view—like a businessman’s—is transactional. But here’s the thing: Japanese Prime Minister Shinzo Abe actually wants a more muscular Japan. Japan has for five straight years increased its military spending, even if the military budget remains less than 1 percent of the country’s GDP. This is not for America’s benefit, but for Japan’s. China is growing larger and more powerful every day as America recedes further from Obama’s Asia pivot. Abe had hoped that the Trans-Pacific Partnership would keep the U.S. tethered to the region; wishful thinking it turns out. But in this instance, Japan’s desire to shoulder more security responsibility dovetails nicely with Trump’s.

5. Canada
Trump and Canada’s liberal, youthful Justin Trudeau may prove the oddest couple of all time, but Trump has repeatedly said he favors construction of the Keystone XL Pipeline with Canada, which Obama had nixed over environmental concerns. Approving Keystone is expected to net the U.S. 9,000 construction jobs and add $3 billion to GDP. It’s an even bigger win for Canada’s beleaguered energy industry. And Trudeau should take any common ground with Trump he can find. The U.S. is Canada’s largest trade partner, with more than $2 billion in goods and services crisscrossing the Canadian/U.S. border daily; moreover, a fifth of Canada’s economy relies on exports to the U.S. Of course there are still plenty of challenges for the future of U.S.-Canadian relations given Trump’s fiery rhetoric over the NAFTA trade deal. But there’s space for cooperation as well. And it’s in those spaces of opportunity where Trump will largely succeed or fail as president. It’s going to be an interesting four years. 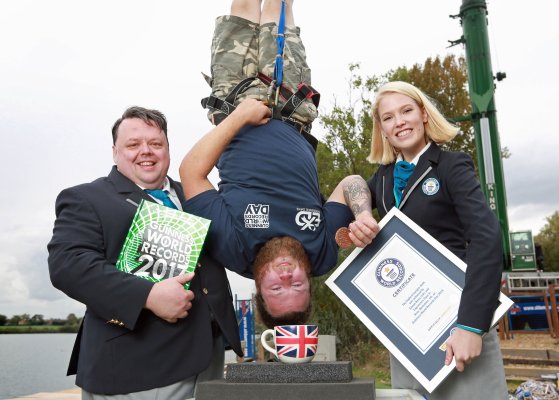 Watch a Thrill Seeker Break a Guinness World Record by Dunking Biscuit During Bungee Jump
Next Up: Editor's Pick