Here's How Campaigns Would Work If We Abolished the Electoral College

For the fifth time in history, the U.S. has elected a president who lost the popular vote, renewing calls to abolish the Electoral College and move to a simpler system.

But strategists who have worked on presidential campaigns say that would change the way elections run dramatically, possibly exacerbating some of the complaints Americans have about their current system.

They say that under a national popular vote, they would push their candidates to spend more time in TV interviews; hold more rallies in big cities like New York, Houston and Los Angeles; raise vastly more money for nationwide advertising, direct mail and voter outreach; and focus more on their party base than swing voters.

In short, if you were unhappy with the 2016 election because it featured a charismatic celebrity holding big rallies and doing cable TV interviews facing off against a longtime politician raising hundreds of millions of dollars from major donors, you might not like how campaigns under a popular vote would turn out.

First, strategists say a popular vote would push Democratic presidential candidates to run up the tally in urban centers, while Republicans sought to crank out votes in suburban and exurban areas around them.

“I would never go to another county fair. I’d never go to a local fish fry. I’d never go to a VFW,” said Hogan Gidley, who advised Republican candidates Rick Santorum in 2012 and Mike Huckabee this year. “Instead, I’d send my candidate the major city centers on the coasts. … There’d be no reason to campaign in Middle America because the votes wouldn’t be there.”

“You’ve been trick or treating: You want to get to as many houses as possible,” he said. “It’s the same idea.”

President-elect Donald Trump, who criticized the Electoral College in the wake of Republican Mitt Romney’s defeat in 2012, echoed that logic in a tweet Tuesday, noting that he would have had a much different strategy if he were aiming to win the popular vote.

“If the election were based on total popular vote I would have campaigned in N.Y. Florida and California and won even bigger and more easily,” he wrote.

Gidley argued that would be a disservice to the eventual winner, who would be less familiar with the issues facing rural voters. And he said it would reduce voters’ access to the candidates, since events in big cities would be more likely to be massive rallies than more accessible town-hall meetings held in places like Iowa and New Hampshire.

On the other hand, Dave Hamrick, who ran Democrat Martin O’Malley’s presidential campaign, said that candidates would pay more attention to minorities.

“I think that you have a lot of voters, including large swaths of African-Americans, Asian-Americans and Hispanics, that are currently disenfranchised because they live in states that are not battlegrounds and they’re not sought after in the current system,” he said.”I think more people will participate in an election where everybody’s vote is being sought.”

Overall, the strategists said that they would recommend their candidates focus less on campaign events and more on TV interviews, whether that was with network news, cable news channels or entertainment like “The Ellen DeGeneres Show.”

“There would be less incentive to make 10 stops a day in 10 different states and instead you would just hunker down in TV studios in New York and L.A. and talk to the biggest audiences that you could,” said Alex Conant, who advised Republican Marco Rubio this year.

That would exacerbate a trend that reached new heights this year, with Republican Donald Trump getting as much as $5 billion in free publicity on TV, according to mediaQuant, which tracked media coverage of both candidates and came up with a dollar value based on advertising rates.

To compete, strategists say candidates would need to raise a lot more money to air ads in more expensive media markets in the country’s top urban areas, instead of just the handful of battleground states each cycle. Fundraising would also have to increase to pay for more campaign offices across the country, especially in big cities with higher average rents, as well as direct mail and even online outreach for the entire country.

That, too, would exacerbate a trend that accelerated this year, with the team backing Democratic nominee Hillary Clinton raising more than $1 billion for her campaign, party and joint fundraising committees and super PACs supporting her.

Sarah Isgur Flores, who advised Republican Carly Fiorina this year, said that would mean candidates would either be more beholden to fundraising or else they would need to be famous enough to kickstart a campaign on their own, as both Trump and Clinton did.

“Celebrities would become much more viable candidates,” she said. “You’d really need everyone to know your name right off the bat, since you wouldn’t have time to build name ID.”

Preston Maddock, who worked on Democratic efforts in Pennsylvania this year, said that depending on how a national popular vote was structured, it could also empower third parties, especially if it didn’t come with a requirement that the winner reach a majority. That could lead to candidates with strong support in only a single region of the country, such as the South or the Midwest.

“That would be very concerning,” he said. “If they were just a regional candidate, what would voters in the rest of the country think about their mandate to govern?” 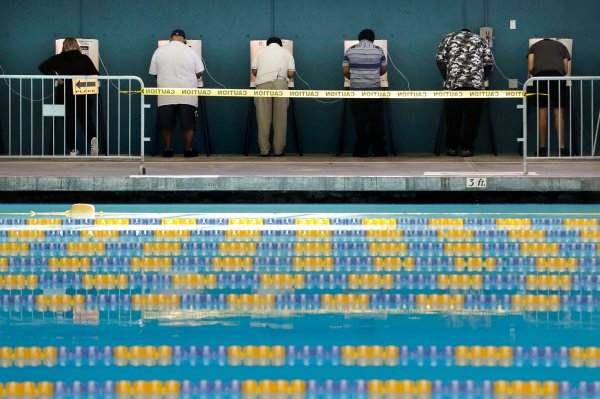 From Pool to Pool Hall: America's 10 Oddest Polling Stations
Next Up: Editor's Pick