To judge it by its title, The Zookeeper’s Wife may sound like a compilation of panda hugs and chimp high-fives—and indeed, recent photos from the set show star Jessica Chastain snuggling adorable lion cubs—but the forthcoming movie has more to do with Schindler’s List than it does with Animal Planet. Based on Diane Ackerman’s bestselling 2007 nonfiction book of the same name, the film tells the story of Jan (Johan Heldenbergh) and Antonina Żabiński (Chastain), a Polish husband and wife who sheltered Jews in their zoo during World War II.

When the Germans invaded Poland in September of 1939, much of the Żabińskis’ zoo was destroyed, along with many of the animals that lived there. But the couple, as members of the Polish underground resistance, began smuggling in Jews escaping from the nearby Warsaw ghetto by hiding them in garbage cans they claimed were full of feed for the pig farm that now operated on the land. Risking execution if caught—the chief adversary in the movie is a watchful Nazi zoologist played by Daniel Brühl—the Żabińskis would go on to save the lives of 300 Jews throughout the Holocaust.

Directed by Niki Caro, best known for the 2002 New Zealand drama Whale Rider, The Zookeeper’s Wife is set to hit theaters on March 31, 2017. 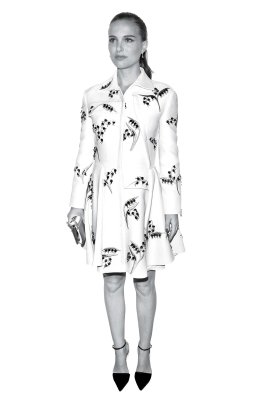 5 Questions With Natalie Portman
Next Up: Editor's Pick