Every Religious Person in America Must Help Our Muslim Brethren

Joseph Q. Jarvis is a public health consultant and is currently serving as bishop of an LDS Ward in Salt Lake City

For many in this country, the 2016 election was a cause for sorrow and consternation. For others, it has been a moment to exalt and rejoice. The chasm between supporters of the two candidates seems as large as the nation itself. It is as though there were two distinct and irreconcilable Americas uncovered on Nov. 8. We write together although we represent very different parts of the American polity. One of us is a Mormon bishop, living in red-state Utah, who, until the President-elect was nominated, counted himself a life-long Republican. The other is a Jewish rabbi, living in true-blue New York City, and a life-long Democrat. What unites us is so much greater than the divisions implied by those descriptors.

As religious leaders who embrace the freedoms that America affords us, we both are disturbed by the rancor and rhetoric of the election campaign. Secretary Hillary Clinton had been famous for the listening tour she undertook when she ran for senator. In this campaign, however, she ignored a significant segment of the population, many of them former Democrats, and dismissed many as a “basket of deplorables.” This was an insult to many Americans and was not easily forgiven.

President-elect Donald Trump, for his part, ran a campaign that countenanced xenophobia, misogyny, racism, Islamophobia and anti-Semitism. It deployed a barrage of hateful rhetoric and condoned white supremacist memes. We pray that such language is behind us now and that both sides repent of their political sins.

This elevation of party and partisanship failed America. We cannot afford to be divided in this fashion. We cannot continue to be red America versus blue America. Only as a united America can we find a way forward, together. The great religious principle that should guide us is to “love our neighbor as ourselves.” So we must stand against any attempt to marginalize Muslims or any other religious minority. As a Jew and a Mormon, we know only too well the horrible consequences of such demonization of the religious other. We must remember that there were Muslims in this land even before we became a country. We must remember the indigenous religions of this country: those of the native Americans and that of the Church of Jesus Christ of the Latter Day Saints. Judaism, Christianity and Islam all share the notion that we stem from common ancestors: Adam and Eve. We are one great family of American citizens, no matter what religion, what God we worship, or how we worship.

As we think of our common ancestry, almost all of us, no matter whom we voted for, can relate to the idea that we are a “nation of immigrants.” Whether ourselves, our parents, our grandparents or perhaps further back in history almost all of us have immigrant pasts. This country was made great by the labor and imaginations of immigrants. We must embrace the immigrant, most especially the refugee population, whether we want to keep stronger together or make America great again.

We literally are sickened by the poor state of health care and the crisis of gun violence. We call for a continued reform of our insurance practices so that even more Americans can have access to health care. We call for a renovation of our medical practices, putting patient care and financial efficiency before profits. And we call for a sensible gun regulation policy that respects the Second Amendment of our constitution while ending the scourge of gun violence.

We share common hopes for our nation, and for our children and grandchildren. We invite everyone to work for one America. There is a way forward. It is not the path of partisan politics. Nor can it be the path of winner takes all. Rather, it is the straight path which begins with personal righteousness, justice and equity. The biblical precept of love serves as a good touchstone to judge our actions. If we could but do for our neighbors as we wish for ourselves, we can be “one nation under God, indivisible, with liberty and justice for all.” 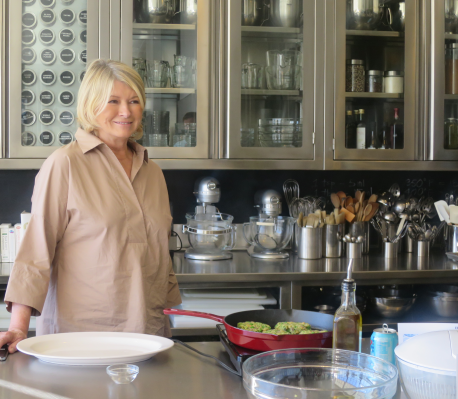 I Cooked a Mushy Pea Burger for Martha Stewart
Next Up: Editor's Pick