Donald Trump and the Ninth of November

It was on the very early morning of Nov. 9, 2016, that Donald Trump secured his historic election to the Presidency of the United States. A number of commentators pointed out that November 9 was the anniversary of Kristallnacht, the anti-Jewish pogrom that erupted in Germany in 1938, and one recent article on German reaction added that it was also the anniversary of the 1989 fall of the Berlin Wall.

But November 9 also has another meaning in German history.

The events of Nov. 9, 1918, were more important, in a sense, than either Kristallnacht or the fall of the wall, since they made both possible. On that day, the abdication of Emperor William II was announced, clearing the way for the armistice with the Allies, the Versailles Treaty, the foundation of the Weimar Republic and nearly 15 years of intermittent political and economic chaos, culminating in Hitler’s seizure of power in 1933.

From 1871 to 1914, the German Empire had governed Germany very effectively; its dissolution represented the end of an era. Donald Trump’s election, a victory over the establishments of both political parties, likewise represents the death of our old order, and we do not know what will replace it.

Founded by Otto von Bismarck in 1871 after three successive victorious wars in seven years, the German Empire was never fully democratic. While it had a Reichstag, or Parliament, elected by all its male citizens, the Emperor chose the Chancellor and other Ministers. The Empire was a confederation dominated by Prussia, by far its largest state, which had unequal suffrage and a very privileged aristocracy. But the empire had flourished culturally and economically for 33 years, and foreign observers recognized that it seemed likely to become, and remain, the dominant power in Europe within another decade or two. Across the Atlantic, many Americans also viewed Germany as the most dynamic power in Europe, and regarded Theodore Roosevelt and the emperor William II (who had acceded to the throne in 1888) as kindred spirits.

By 1912, however, the generation that had fought the wars that founded the empire—the equivalent of the GI generation or “greatest generation” in the U.S.—had fallen from power, and younger politicians and publicists were charting new paths. The Social Democrats became the largest party in the Reichstag in 1912, while nationalist parties on the extreme right pushed for the exclusion of minorities from public life. German opinion was fragmenting and the government did not know how to give it a new direction.

Then, in July 1914, the German government decided to turn a crisis between its ally Austria-Hungary and Serbia into a trial of strength with the opposing alliance of France and Russia. The result was the outbreak of the First World War, in which Great Britain and later Italy also joined Germany’s enemies. Despite spectacular early successes on the western front and a steady advance in the east, the German military could not win the total victory they sought.

The war took the lives of millions of soldiers, inflated currencies and threatened the political order all over Europe. The task faced by governments was to bring it to an end before they entirely lost the loyalty of their soldiers and peoples. The Russian Empire failed that test in March 1917, and the first of two revolutions toppled the Tsar. That November, Lenin and the Bolsheviks took power. The Germans took advantage of the situation to force the Bolsheviks into disadvantageous peace terms that would allow Germany to try for total victory in the West in 1918. Meanwhile, Woodrow Wilson had led the United States into the war in April 1917 in response to German submarine warfare.

The huge German offensive that began in March 1918 initially made new gains, but stalled in mid-summer after having wrecked the German Army. When the allies began advancing in August, whole German units disintegrated. In September, one of Germany’s three remaining allies, Bulgaria, left the war, and the collapse of Austria-Hungary was obviously imminent. General Erich Ludendorff, the effective dictator of Germany—where the civilian government had essentially collapsed—insisted on the appointment of a new liberal government, led by Prince Max of Baden, which would approach President Wilson and ask for an Armistice based on his 14 Points.

Prince Max understood that Germany’s future depended on reaching a genuine compromise with the allies while leaving German sovereignty intact. But the decision to bring him to power, sadly, came almost two years too late.

Eventually, in the first week of November, the government had no choice but to accept conditions that would leave Germany totally at the allies’ mercy. Mutinies broke out in the German fleet and spread in the army, and a small Communist party hoped to repeat Lenin’s success in Russia. The opposition parties, led by the Social Democrats, demanded the abdication of the Emperor.

On Nov. 9, he agreed. Two days later, new civilian leadership accepted the Armistice. Seven months after that, it was forced to accept the Versailles Treaty, destroying its prestige in the people’s eyes. In the 14 years after the fall of the German empire, no political leader managed to create a new consensus. Hitler ultimately imposed one beginning in 1933.

Here in the United States, decades of globalization, stagnant incomes, controversial immigration and conflicts over values have led to gridlock and widespread disillusion with our political class. The United States has been fighting an endless but incomparably less costly war for the last 16 years. It has suffered a serious economic crisis, though the worst of that is past. Congressional Republicans, who have been fighting hard to undo the legacy of the New Deal for a couple of decades now, are also in the ascendant. The nation’s governing elite, of which Hillary Clinton was a quintessential representative, has also lost the confidence of about half of the American public, and Donald Trump will now be our President. He and the team he is assembling seem determined to remake America.

Our own Ninth of November, like the German one 98 years ago, is both an end and a beginning. Our future is equally uncertain. 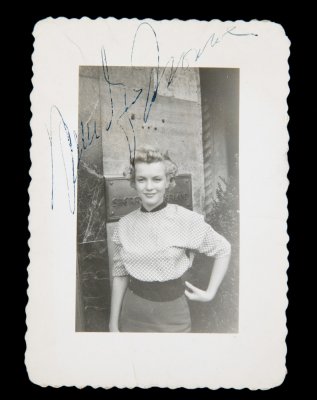 Rare Snapshots of Marilyn Monroe Reveal the Star's Lighter Side
Next Up: Editor's Pick