Jakarta's Governor Basuki Tjahaja Purnama, center, in a batik shirt, faces journalists after investigation by the police at the police headquarters in Jakarta on Nov. 7, 2016
Wawan Kurniawan/Anadolu Agency/Getty Images
By Kevin Lui

Indonesian police have named the governor of the country’s capital Jakarta a suspect in a blasphemy case, just as he was campaigning to seek a second term. This development comes just days after hard-line Muslim protestors called for his indictment in a rally.

The police announced the move against Basuki T. Purnama, more commonly known by his Chinese nickname Ahok, on Wednesday. The Jakarta Post reports that it follows a long investigation and 10 hours of closed-door testimonies on Tuesday.

Basuki has been accused of insulting the Islamic faith by bringing up a Quran verse in a campaign speech — a speech for which he subsequently apologized, while maintaining that he never intended to insult Islam or the Quran.

He has been the target of intense protests by hard-line and ultraconservative Muslims, who don’t believe a non-Muslim should be in a leadership post. Tens of thousands descended upon Jakarta on Nov. 4 for a march from the city’s biggest mosque to the presidential palace. The protest, which saw the President occasionally targeted alongside Basuki, led to clashes between police and protesters as night fell, resulting in at least one fatality.

After news of the case broke, the President urged the public to respect the investigation, reports the Post. “What has been done by the police has met the necessary principles of transparency, fairness and professionalism,” Joko “Jokowi” Widodo said through a spokesperson.

A Christian of Chinese heritage, Basuki’s ascendence to Jakarta’s governorship in 2014 was seen as a milestone of tolerance in Indonesia, home to the world’s largest Muslim population. He had been the city’s deputy governor before his then boss Jokowi became the country’s President.

The BBC reports that Basuki is still allowed to seek re-election. “This is not the end, there will be a court process which we hope will be open. We will still take part in the election,” he told reporters. If convicted, blasphemy carries a maximum of five years in jail in Indonesia.

Hours after the rally turned violent, Jokowi told reporters in Jakarta, “Political actors are taking advantage of the situation.” He also promised that legal actions would be taken against any such instigators if investigators turned up evidence of law-breaking.

—With reporting by Yenni Kwok 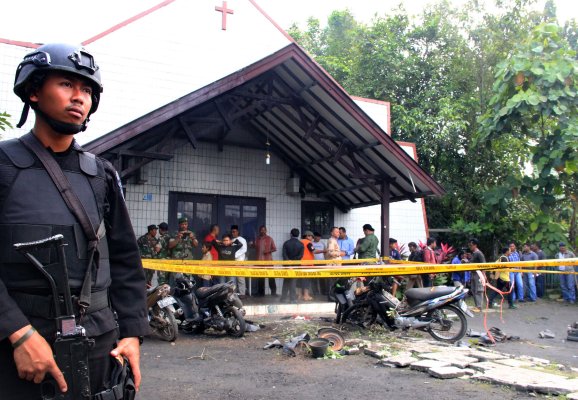