A state of emergency has been declared in the South Island’s Canterbury region, where as many as a thousand tourists and residents have been stranded in the coastal town of Kaikoura. Heavy rain combined with earthquakes have left the town cut off.

The New Zealand Herald reported that as many as 100,000 landslides were caused in the Northern Canterbury and southern Marlborough regions.

In the heart of Wellington, the country’s capital, an eight-story office building appears to be on the verge of collapse, and the surrounding area has been evacuated. Other buildings appear to have been affected.

“There’s only a church in between the building and parliament. It’s swaying — it’s a minor movement but it’s enough that it’s visible,” Nick Shewring, a local business owner told TIME

Flooding has also affected the greater Wellington area. “The weather here in Wellington is yet another complicating factor to the aftermath of the earthquakes that took place,” said Prime Minister John Key in a statement issued around midday on Tuesday.

Geonet has issued a forecast for the next 30 days, saying that continued but dwindling aftershocks are almost certain. There is a small chance (7 percent) of an earthquake stronger than Monday’s 7.5 tremblor.

The agency also issued a reminder for people in coastal areas to “evacuate immediately” if they feel a long or strong earthquake.

Meanwhile, scientists have debunked a trending theory that the quakes were connected to this week’s supermoon — thought to be the brightest, largest moon in 60 years due to its proximity to the earth. 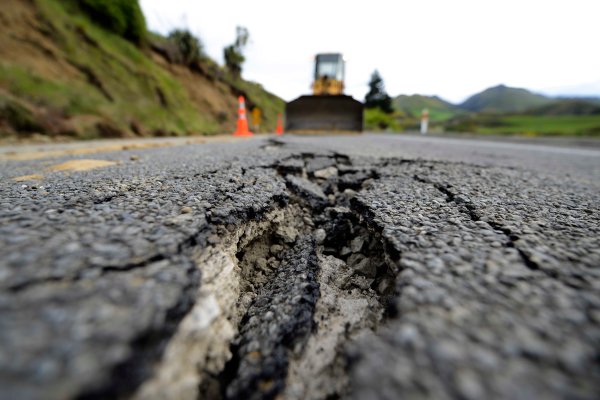 This New Zealand Radio Presenter Stayed on Air During an Earthquake
Next Up: Editor's Pick