The clear anti-Fascist sentiment of Fantastic Beasts and Where to Find Them — a picture that’s arriving just as the U.S. faces a seismic political shift—should make it feel like the movie of the moment. But it’s not really a movie for any particular moment. While this Harry Potter spinoff features some charming and occasionally dazzling special effects — and was adapted by J.K. Rowling herself, using her 2001 faux-textbook of the same name as a jumping-off point — in the end it really is only dragon food, a product conceived to deliver more, more, more of something that audiences are hungry for.

There’s nothing inherently wrong with that. But the picture — directed by David Yates, who also gave us the last four Harry Potter films, terrific ones — feels both sprawling and crowded, as if it were trying to pack too much mythology into one cramped crawlspace. Fantastic Beasts is a prequel, set years before Harry Potter was even a zigzag-lightning-scar-shaped gleam in his parents’ eye: it’s 1920s New York, and Newt Scamander (Eddie Redmayne), a “magizoologist” with insider knowledge of all sorts of magical creatures, is just arriving from London. Stateside, it’s a troubled and troubling time: the underground wizarding community is under threat, because a whirling black whatchamacallit has been forging a path of destruction through the New York City streets. To protect their ranks, the wizards must take great care to hide their powers from the No-Majs (the American term for Muggles). It doesn’t help that a fanatical group, led by Samantha Morton’s demonically prim Mary Lou Barebone, is out to break the wizards’ ranks apart. Also, dark wizard Gellert Grindelwald has gone missing—in case you happen to find that Fantastic Beasts doesn’t have enough plot points for you to digest.

Into this mess steps Scamander, hoping to research some new magical beasts and protect some that have become endangered. He happens to carry a number of such creatures in his mystically bottomless suitcase (more on that later), though their misbehavior ends up landing him, and the new friends he makes, in a great deal of trouble. Those misadventures involve an earnest, friendly No-Maj and aspiring baker, Jacob Kowalski (Dan Fogler); Tina Goldstein (Katharine Waterston), a “Statute of Secrecy” enforcer who misperceives what Scamander is up to and tries to turn him in to the wizarding officials; and Tina’s sister, Queenie (Alison Sudol), a charming flapper-girl who can read minds as efficiently as a voracious grade-school reader tearing her way through all seven Harry Potter books.

There’s so much going on in Fantastic Beasts that after the first act, you almost can’t be bothered to care what happens next. In the movie’s world, there’s a magical explanation for everything, which means story logic too often gets left by the wayside. (In the Harry Potter books, Rowling did a remarkable job of making magical logic seem consistent and believable, and the movie adaptations followed suit; that clarity has been lost here.) And even though the movie preaches tolerance, its ideas never quite jell. Still, Yates and Rowling are intent on working their charm on us, and some of it sticks: If Redmayne’s performance is just too adorably mannered, Fogler and Sudol twirl through their roles like dance-floor champs — both have low-key, breezy allure.

And the beasts? They’re often pretty fantastic. A puffin-type creature with a penchant for petty theft, a sort-of rhino-hippo thing whose bumpy face glows as if lit from within, an elegant green twiglike being whose demeanor is shy though his actions are heroic: These are just some of the friends who take up space in Scamander’s incredible suitcase, which opens up into its own vast polychrome world of wonder. Most affecting of all is a majestic, giant griffin with a noble brow and feathers brushed with gold. This CGI beauty is the real star of the show, though he doesn’t speak a word. His magic needs no windy explanatory exposition, which is why it’s easy to love him best. 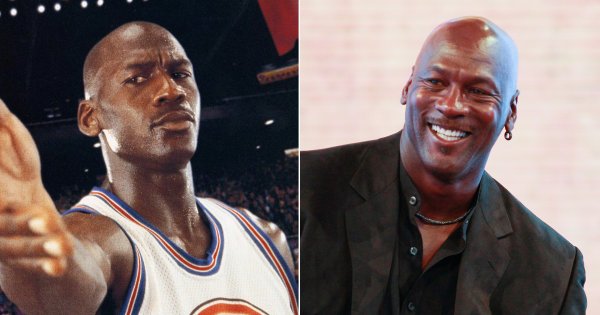 See the Stars of Space Jam, Then and Now
Next Up: Editor's Pick