Paid Family Leave Could Be a Reality in Trump's America

Donald Trump gives two thumbs up to the crowd during the evening session on the fourth day of the Republican National Convention on July 21, 2016.
Chip Somodevilla—Getty Images
Ideas
By Josh Levs
Josh Levs is the author of All in: How Our Work-First Culture Fails Dads, Families, and Businesses–And How We Can Fix It Together.

Among the many crucial issues dealt a blow in the election was paid family leave, which the U.S. desperately needs.

Hopes for a national paid family leave insurance program were growing before the election. Hillary Clinton supported a plan for 12 paid weeks, to allow workers to care for a child (including a newborn), sick spouse, elder relative or themselves after an illness. Her proposal was similar to the core idea of the FAMILY Act, which has gained support among Democrats on Capitol Hill in recent years.

During Donald Trump’s campaign, he called for six weeks of paid maternity leave for women after giving birth. There are many problems with this, including its sexist presumption that only women can be caregivers. Policies that only allow women time off end up hurting women by pushing women to stay home and men to stay at work, reinforcing our anachronistic Mad Men-era work cultures. Also, Trump didn’t show how he’d cover his plan.

As a nation, we already know what works. Three states—California, New Jersey and Rhode Island—have paid family leave insurance programs. Workers make tiny payroll deductions to create statewide funds. When they need the time, they get paid through that fund. Employers do not have to pay salaries while they’re off. The results are fantastic: profits and productivity are up.

Seeing how well those programs work, New York passed a robust paid family leave plan that will begin in 2018. The FAMILY Act would make these programs national. But now that Trump has won the election, that seems extremely unlikely for the next few years. Although paid family leave has broad bipartisan support, that support has not translated into bipartisan action on Capitol Hill.

Meanwhile, American families are suffering. The U.S. is the only developed nation that does not ensure a parent can be home with a new child and put food on the table for at least a block of weeks.

The good news is that advancements at the state level could make a difference more quickly.

In this election, state policies for paid sick days and minimum wage increases passed in Arizona and Washington. Support is also growing for a new paid family leave law in Washington, which could kick in as early as 2017. (Washington passed a law calling for paid family leave several years ago, but never funded it.)

I reached out to my fellow members of a working group on this issue, organized by Sen. Kirsten Gillibrand of New York. Ellen Bravo, who directs the organization Family Values at Work, said she remains hopeful that more wins in states will “expand the body of evidence about the benefits of paid leave, while engaging activists who help demonstrate the cost of doing nothing on individuals, families, businesses and the nation. State wins help point to the need for a federal program and to strengthen the number of champions for that as well.”

Vicki Shabo, vice president of the National Partnership for Women and Families, pointed out that four new senators “ran on issues core to women and working families” — Catherine Cortez Masto of Nevada, Tammy Duckworth of Illinois, Kamala Harris of California, and Maggie Hassan of New Hampshire.

Shabo said she remains hopeful for a national program. “Advocates, leaders in the private sector, and working people across the country will continue the fight to fix America’s paid leave crisis, mounting enough pressure to show federal lawmakers that they must act,” Shabo told me. “The election is a setback, to be sure, but America’s families can’t wait.” 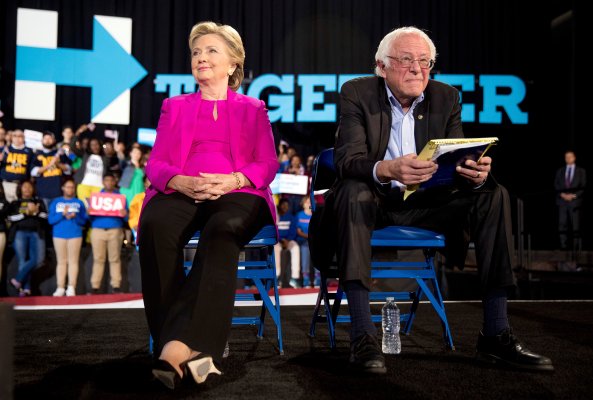 And the 2016 Ralph Nader Award Goes to... Bernie Sanders
Next Up: Editor's Pick