That Twist and 4 Other Things We Learned About Westworld

Westworld’s seventh episode, “Trompe L’Oeil,” opens with what appears to be a memory from Bernard’s (Jeffrey Wright) agonizing past. We see Bernard wake up to find himself at his son’s hospital bedside reading from Alice’s Adventures in Wonderland. The quote he reads provides a telling framework for the story: “If I had a world of my own everything would be nonsense. Nothing would be what it is, because everything would be what it isn’t.” The Mad Hatter’s lines welcome us into an episode that confirms the elusive truth about how our world can defy our perception. Everyone who orbits Westworld may not be who they appear to be, and this episode officially altered the audience’s reality, opening up endless possibilities.

Bernard is a host, and he has been for a long time.
So it turns out that mild-mannered Bernard is actually a very old-school host, even though the show presented him as human. Dr. Ford (Anthony Hopkins) orders him to take out Theresa (Sidse Babett Knudsen) for scheming to destroy his lifelong passion project, which Bernard has been an integral part of this whole time.

In the remote diagnostic facility beneath Dr. Ford’s happy place, the episode’s final scene confirms the popular fan theory as Bernard sputters out of control due to a crucial update: he’s one of Ford’s creations, just like the manmade machines he’s been charged to oversee. At first, he ignores the proof—a blueprint that doesn’t have the word “Bernard” on it. To him, none of it adds up. He was a father who sat beside his dying son, he had a wife, but that’s just the life he was coded to remember.

Lucky for Ford, this restricted area, which is perhaps a metaphor for his troubled mind, has awful cell phone service. So no one comes to stop Bernard from choking Theresa to death. Ford even uses Hale’s words—“blood sacrifice”—when he’s intimidating Theresa. This perhaps proves he’s been watching her every move: “Like I said, I built all of this,” he says before the kill. On Ford’s command, without hesitation, Bernard removes his blazer signifying that it’s murder time, or simply because he really respects a sharp blazer, and he ends her life. There’s one less enemy to Ford’s creativity to contend with. But who’s going to remind Lee that he’s worthless now that she’s gone? Maybe Hale.

Maeve has a real shot at getting out of there.

The show’s been tracing the arc of Maeve’s awakening, and as far as viewers could see, she’s been the most threatening android this side of Sweetwater. But that’s not the case. Sweet innocent Clem is also conscious and powerful, so no, she will not obey a Hemsworth brother when he tells her to shut down. She will just fix her hair and wipe the blood, as we see during the board’s demonstration.

At the Mariposa bar, Maeve tries to find out if Clem also dreams she’s someone else (prior build), but Clem acts very innocent about this line of questioning. Before Maeve can get anywhere, the cleanup crew descends to extract a host who’s done something really dangerous. Notably, Maeve doesn’t freeze, proving she can ignore these shutdown commands. She just clutches yet another sharp object that just happened to be right there in case she needs to defend herself. Clem, on the other hand, seems to snap into sleep mode as she’s removed, although this could simply all be an act.

Maeve returns to the slab and tells her new subordinate, Felix, to help her find Clem. He shows her that she is at the body shop for a routine nose drill with Sylvester. Emboldened, Maeve enlists Sylvester and Felix to help her escape. Felix tries to discourage her by warning her trying to escape would be a suicide mission, but she threatens to kill them and explains that she’s not afraid of death. “You think I’m scared of death? I’ve done it a million times. I’m f-cking great at it. How many times have you died?” Maeve is strong enough to attempt to leave and to her advantage, she has two people on the inside who can help her. At this point, the show doesn’t tell us if she’s mobilizing Clem or other hosts with her newfound power.

Dr. Ford and his data aren’t going anywhere yet.
The board is out to get rid of Ford because he’s been disruptive, hogging Delos resources in service of his new narrative. But this guy is holding onto his control as tightly as Maeve clings to her conveniently located sharp objects. He flaunts how powerful he is, and is poised to foil the board’s gameplan to secure 35 years of his intellectual property before asking him to resign.

He says, in true mastermind fashion, that everything that motivated Michelangelo, Mozart, Shakespeare and the Empire State Building was thirst for sex. Fans have theorized that Dr. Ford’s feelings about his unsupportive dad could be his undoing, but for now, it looks like he’s in control. It’s not easy to tell. When Theresa fires Bernard, he does nothing except look extra nuts in his close-up. But the episode’s ending (which was in part possible because of Theresa’s intimate connection with Bernard), is a sure sign that if anyone’s in charge, it isn’t the board.

Some hosts are immune to commands, but a gun still works on them.

When the board shames Ford and Bernard with a presentation that demonstrates the havoc the reveries have wreaked on hosts, we learned the hosts are not unstoppable. Yes, they’re overriding the park’s commands, holding grudges and bashing heads, as Elsie warned they could on day one of this journey. Hosts remember trauma and can inflict their own, a major development that’s now advancing at full speed, but it’s not exactly a fair fight.

Here’s how we know. Step 1: A technician, who is the first official worker host, bludgeons Clem. Step 2: After Clem’s memory of that upsetting encounter is seemingly zapped out of her, she resets and immediately murders him. To seize control of her, Ashley Stubbs (Luke Hemsworth) enters the room with a suggestion. “That’s enough sweetheart,” he says and it’s not the only time a man calls one of the females “sweetheart” in this episode.

In an act of defiance, Clem blows him off, and she tastes the blood on her lips, proving that the revenge she exacts is likely a direct result of the reveries. (Fans will note that when the reveries were first introduced to us, the show illustrates the update with Clem touching her fingers to her lips.) Unlike the original 1973 movie, host rebellion usually happens with a woman turning the tables on her male attacker. Remember when Dolores pulled the trigger on her assailant? But the park’s security team still stops Clem by shooting her, so it would seem that a gun in a human’s hands is still a protection against an uprising.

There’s more to the attraction between Dolores and William.

After last week’s episode skipped Westworld’s favorite couple, we return to Dolores and William, who spend a passionate night together. They’re falling for each other, but there’s a little mood killer. Turns out, they’re riding through Ghost Nation, a romantic attraction lined with heads of intruders on sticks. Lawrence explains two important things here: the Confederados aren’t fighting a fair war, and Westworld has absolutely seduced William, even though at the outset, he appeared to be immune to its charms.

When William and Dolores chat about their hope and dreams, Dolores says in more loose terms that she knows her life is a lie and she aches for truth. William, on the other hand, reveals he used to escape into storybook adventures, and via his passage to Westworld, he has crossed into a universe he could have only read about. Dolores longs for freedom while William’s captivated by the fantasy of it all. He’s done pretending he belongs with the rich folks, and he’d very much like to start getting real.

To trick the Confederados who ambush them, William, Dolores and Lawrence rely on a trompe l’oeil visual move. They send a lifeless cowboy “mannequin”, white surrender flag in hand, trotting out to the scene so that Lawrence can take aim and explode it. In the chase that follows, William saves Dolores so he can get to be the hero and she’s the damsel again, a very storybook setup. He can’t be there for her forever though, as after 28 days, apparently guests have to check out.

Most intriguing of all, when William is sleeping like a useless baby, Dolores gets creative and paints an entire masterpiece. It’s an important first: she used to paint her environs, but this time, she came up with a vision of a place where the mountains meet the sea from her head. And lo and behold, it actually exists at the end of their treacherous chase. So it’s possible that Arnold or some powerful figure planted this exact image there for her find. What’s the end game? Best to take Lawrence’s advice and ask the dust. 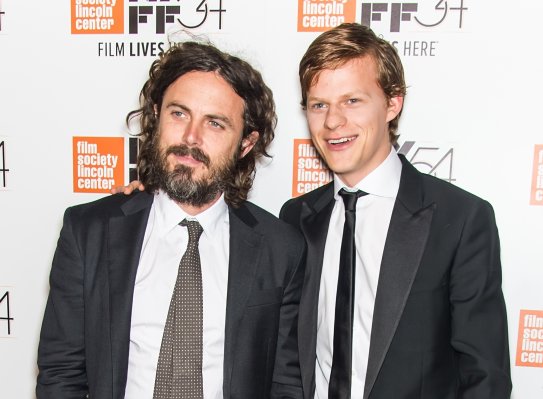 Watch Casey Affleck Give a Knockout Performance in This Clip From Manchester by the Sea
Next Up: Editor's Pick