President-elect Donald Trump sat down with CBS News for his first television interview since his surprising win against former Secretary of State Hillary Clinton and offered a glimpse of how the businessman with no political experience would govern.

Throughout the wide-ranging interview, Trump revealed his immediate plans on immigration, health care, and the Supreme Court. Here are the highlights:

1. The Wall might just be a fence
Trump promised to build a “big, beautiful wall” throughout his presidential campaign. But in the interview with 60 Minutes, Trump revealed he would accept a fence along the southern border, though he still plans to build a wall along parts of the divide between the U.S. and Mexico. “It could be – it could be some fencing,” he said. “But certain areas, a wall is more appropriate. I’m very good at this, it’s called construction.”

2. But millions of criminals could still be deported
Trump, who pledged to deport millions of undocumented immigrants on the campaign trail said he plans to keep that promise. “What we are going to do is get the people that are criminal and have criminal records, gang members, drug dealers, we have a lot of these people, probably two million, it could be even three million, we are getting them out of our country or we are going to incarcerate,” he said. Speaker of the House Paul Ryan appeared to refute this point during an interview that aired earlier on Sunday, telling CNN’s State of the Union the U.S. will not be “erecting a deportation force.”

3. No more divided government?
After a period of disagreement between the U.S. Congress and the White House under President Barack Obama, Trump signaled that the two branches have already found some common ground on key issues. In his interview, the President-elect said health-care, immigration, and tax-reform will be their major initiatives on the front end. Given that Republicans will control both, Trump says change will come quickly.

4. A message to protestors … and one to bigots
Trump still believes some of the people protesting against him are “professionals,” but told the people taking to the streets across the country not to be afraid of his future administration. “Don’t be afraid. We are going to bring our country back. But certainly, don’t be afraid,” he said. In regard to reports that some of his supporters have been using racial and ethnic slurs and violence against Muslims, African Americans, and Latinos, the president-elect had a message. “I am so saddened to hear that. And I say, ‘Stop it.’ If it– if it helps,” he said during the interview, which was taped on Friday. “I will say this, and I will say right to the cameras: Stop it.”

5. A pledge to tighten abortion restrictions
On the trail, Trump pledged to nominate Supreme Court justices who would protect the Second Amendment and overturn Roe v. Wade, the decision that made abortion legal in the U.S. Trump said abortion rights should be left up to the states. “We’ll see what happens. It’s got a long way to go, just so you understand,” he said. “That has a long, long way to go.”

6. He’ll have more ‘restrained’ Twitter presence
An avid social media user, Trump said he’ll keep his Twitter account as president, though he says he’ll be more “restrained” when he’s tweeting from 1600 Pennsylvania Avenue. “It’s a modern form of communication. There should be nothing you should be ashamed of. It’s– it’s where it’s at,” he said. 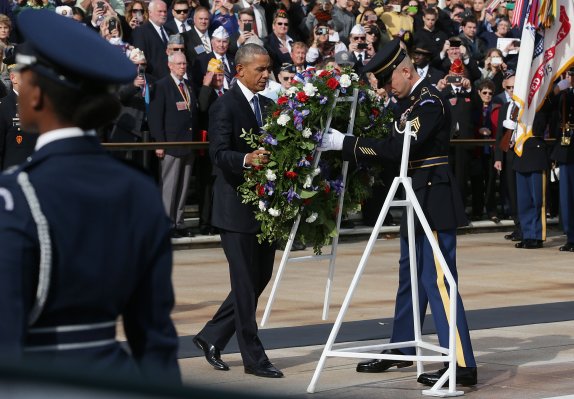 Obama: Look to Veterans for Hope
Next Up: Editor's Pick