Nigel Farage, the British right-wing enemy of the European Union, became one of the first foreign politicians to meet with U.S. President-elect Donald Trump over the weekend, upending the diplomatic order to the embarrassment of the U.K’s ruling Conservative Party.

A photo of Trump posing at Trump Tower with Farage, the interim leader of the smaller U.K. Independence Party (UKIP), was pictured on the front of many Sunday newspapers and was widely dissected online.

The meeting with Farage ahead of British Prime Minister Theresa May or her main opposition leader Jeremy Corbyn of the Labour Party comes as the British government seeks to foster ties with Trump to secure a strong trading relationship after it leaves the European Union.

Now, many in Westminster are coming to terms with the fact a politician long seen as a fringe figure in British politics can command the attention of the leader of the free world. On his return, Farage reported that Trump and his aides are unhappy at the attacks leveled at the President-elect during the campaign by some government figures. Speaking to the Daily Telegraph, he offered to “provide introductions and to start the necessary process of mending fences.”

May has said the government will not be taking Farage up on his offer, but some in the party think it’s not a bad idea. A Conservative member of the House of Lords, the unelected upper chamber of the Parliament, said Farage should be used as a “salesman” for British business.

“Anything we can do at any level to rebuild that relationship will be to Britain’s advantage,” said Lord Marland to the BBC, “and if Mr. Farage happens to be one of the people who encourages that relationship then so be it.”

The diplomatic coup by Farage gives the UKIP leader a status that is neither reflected by his electoral success nor his party’s. Farage has failed seven times to be elected as a Member of Parliament (MP) for UKIP, and is currently a legislator in the European parliament. His party has only one MP, Douglas Carswell, who has clashed repeatedly with its fractious leadership.

Although this lack of representation may be due to Britain’s electoral system — UKIP did receive 12.5% of votes in the 2015 election — the party has long been a minor player on the political scene here, and is seen by many as a single-issue party whose views on British immigrants border on the unacceptable.

The former investment banker, however, can and does claim to have played a part in the country’s decision in the June referendum to leave the European Union. Having joined demands by Euroskeptics in the Conservative Party to have the vote in the first place, he campaigned tirelessly for “Brexit” and has styled himself as the driving force behind its success.

Others may have a stronger claim to that — especially Boris Johnson, the pro-Brexit former London mayor now acting as Britain’s Foreign Secretary — but it was Farage who accepted an invitation to stand alongside Trump in Mississippi this summer and use the example of Brexit to inspire Trump supporters to get out the vote.

The meeting also raises questions about which other foreign politicians might be welcomed into the Trump White House ahead of their elected leaders. Trump’s election was welcomed warmly by populist leaders across the Continent, including the French leader of the National Front, Marine Le Pen, who is seeking the country’s presidency next year.

It remains to be seen whether the grace and favor of the White House will bestow legitimacy on other Trump supporters and flatterers. 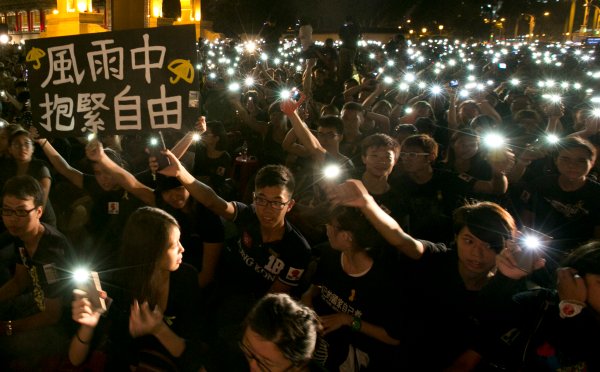