An Indonesian policeman stands guard outside the Oikume Church in Samarinda, Indonesia's East Kalimantan province, on Nov. 13, 2016, after a man allegedly threw a Molotov cocktail toward it, killing a child and wounding three others
AFP/Getty Images
By Yenni Kwok

A man formerly convicted of terrorist offenses has been arrested for allegedly throwing a Molotov cocktail at a Protestant church in Samarinda, in Indonesia’s East Kalimantan province, on Sunday morning, killing a toddler and wounding three other children.

On Monday, at around 3 a.m. local time, a Buddhist temple in Singkawang, West Kalimantan province, was firebombed. Hours later, a Catholic church in Batu, on the eastern part of Java, received a phone call threatening a bomb attack.

In the Samarinda attack, the children were playing in the front yard of the Oikumene Church when the suspect, Juhanda, a.k.a. Jo bin Muhammad Aceng, lobbed the bomb, Kompas daily reported. Intan Marbun, said to be 2 or 3 years old, suffered severe burns and died in the early hours of Monday morning. The other three children are between 2 and 3 years old.

The suspect, who during Sunday’s bombing wore a black T-shirt that read “Jihad Way of Life,” was sentenced in 2012 to three years and six months for his involvement in the “book-bomb” plot in Jakarta a year before. One of the targets was a liberal cultural center called Teater Utan Kayu. He received remission of sentence and was released in July 2014.

Juhanda was arrested again in September 2014 after he was found with an Islamic State (ISIS) flag in Parepare, Sulawesi. At the time, he was allegedly trying to find and kill his wife.

“This case has opened our eyes that [the counterterrorism agency] BNPT needs to improve its deradicalization program,” legislator Eva Sundari said in a statement on Sunday.

President Joko Widodo said that “the bomb case in Samarinda has to be investigated thoroughly.”

Indonesia, a Muslim-majority country, has been wracked by terrorist acts that target police personnel and houses of worship. An attack in the capital Jakarta left eight people dead in January — the deadliest so far this year. In late August, a suicide bomber tried to attack a crowded Catholic church in the Sumatran city of Medan, but his vest failed to detonate. A drawing resembling an ISIS flag was reportedly found at the scene. 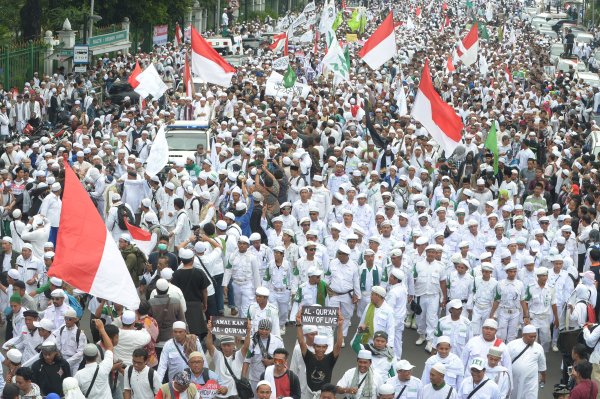 Mass Blasphemy Protests in Jakarta Call for Governor's Prosecution
Next Up: Editor's Pick