A man was shot during a protest against President-elect Donald Trump in Portland, Oregon, early Saturday morning, as demonstrations against his election continued in cities across the country.

The man, who has not yet been identified, was shot as he marched across Portland’s Morrison Bridge with a crowd of other protesters, Reuters reported, citing police statements. He was taken to a hospital with non-life threatening injuries.

The suspect, who is still at large, got out of his car on the bridge, confronted the protester and shot him, Reuters reported.

Protests have broken out across the country since Election Day, condemning Trump’s racist and sexist rhetoric about immigrants, Muslims and women, in particular. In his first interview since the election, Trump was asked on Friday whether his campaign rhetoric went too far. “No. I won,” he told the Wall Street Journal.

Thousands of protesters also marched or gathered at rallies in Los Angeles, Miami, Atlanta and New York City on Friday night and early Saturday morning. In Portland, police in riot gear used tear gas as they clashed with protesters, some of whom threw “burning projectiles” at officers, the Associated Press reported.

Trump on Thursday initially denounced the demonstrations as “professional protesters, incited by the media.” “Very unfair!” he wrote on Twitter. But hours later, his tone had shifted. “Love the fact that the small groups of protesters last night have passion for our great country. We will all come together and be proud!” Trump wrote. 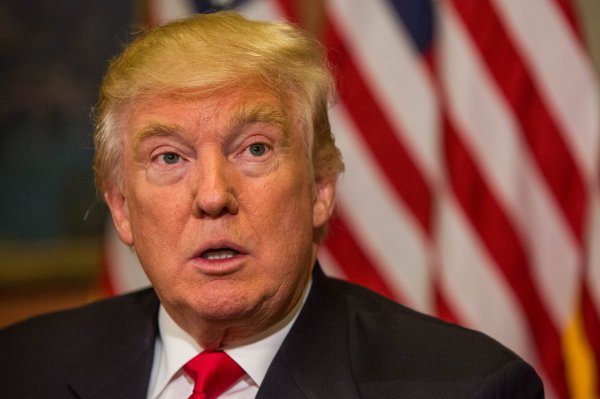 Trump Says He's Willing to Preserve Parts of Obamacare
Next Up: Editor's Pick