President Obama: Look to Veterans for Hope 'Whenever the World Makes You Cynical'

President Barack Obama delivered his final Veterans Day address while in office on Friday, thanking all 18.8 million veterans in the U.S. for their service. His remarks were short and direct, lasting no more than 15 minutes, but his message was meant to reach far beyond the ears of those who served.

In the wake of the remarkable 2016 presidential election, in which businessman Donald Trump emerged as the nation’s future commander-in-chief—a man who insulted a Gold Star family along with veteran and former prisoner of war Sen. John McCain—President Obama called for unity and understanding in his Friday morning address.

“As we search for ways to come together…some of our best examples are the men and women we salute on Veterans Day,” he said. “Whenever the world makes you cynical; whenever you seek true humility, and true selflessness—look to a veteran.”

Our nation’s veterans, he said, are the embodiment of courage and selflessness and are deserving of not only our thanks but our support. The president remarked on the efforts his administration undertook to cut veteran homelessness, increase jobs for vets, and improve veteran health care despite the intense backlogs at Veteran’s hospitals that roiled the administration.

The president praised the U.S. military as the “single most diverse institution in our country” and urged Americans to tap into the spirit of commonality that defines the armed forces as the country moves forward.

“We can show how much we love our country by loving our neighbors as ourselves,” he said. 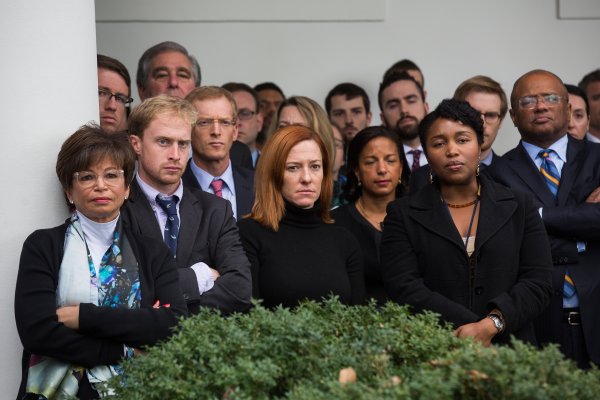 So, What's Happening in This Photo at the White House?
Next Up: Editor's Pick