Senate Democratic leader Harry Reid broke his silence Friday on Donald Trump’s victory, denouncing Trump as a “sexual predator” who “lost the popular vote” and “emboldened the forces of hate and bigotry in America”—and who is now solely responsible for healing the country’s gaping political wounds.

In a fiery statement released three days after the election, Reid, who is retiring, holds Trump accountable for his comments on the campaign trail that inspired “fear” in women, Hispanics and African-Americans in the U.S. While other leading Democrats, including Vermont Sen. Bernie Sanders and Massachusetts Sen. Elizabeth Warren, have said they are tentatively and warily prepared to work with Trump on certain issues, Reid makes no such promise.

“We as a nation must find a way to move forward without consigning those who Trump has threatened to the shadows,” Reid said. “Their fear is entirely rational, because Donald Trump has talked openly about doing terrible things to them.

“If this is going to be a time of healing, we must first put the responsibility for healing where it belongs: at the feet of Donald Trump, a sexual predator who lost the popular vote and fueled his campaign with bigotry and hate,” he added. “Winning the electoral college does not absolve Trump of the grave sins he committed against millions of Americans. Donald Trump may not possess the capacity to assuage those fears, but he owes it to this nation to try.” 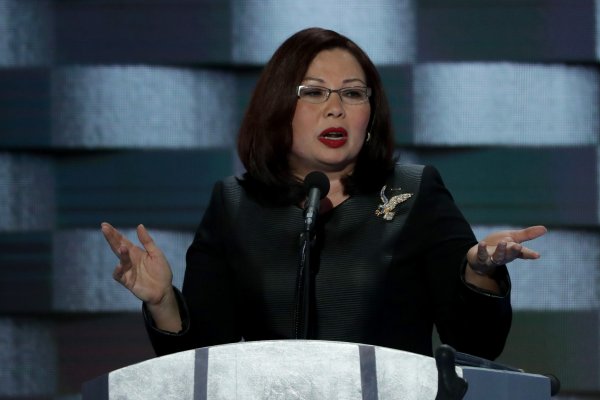 Watch Tammy Duckworth Talk About Her Service in the Iraq War
Next Up: Editor's Pick