Thousands of Loyalist Protesters Rally Against Independence in Hong Kong

Pro-China supporters show the thumbs down in front of Chinese national flags as they attend an anti–Hong Kong independence rally outside the Legislative Council in Hong Kong on Nov. 13, 2016
Tyrone Siu—Reuters
By Nash Jenkins / Hong Kong

Thousands of people in Hong Kong gathered in the streets here on Sunday to angrily decry a mounting movement that demands the semiautonomous city’s independence from mainland China.

The demonstrators — as many as 40,000 of them, according to organizers’ estimates — assembled outside Hong Kong’s Legislative Council, which in September saw the election of several young political activists of separatist bent, unabashed in their criticism of Beijing. Two of those elected legislators, 25-year-old Yau Wai-ching and 30-year-old Sixtus “Baggio” Leung, have been effectively barred by Beijing from serving after pledging allegiance during their swearing-in ceremonies to the “Hong Kong Nation” instead of Hong Kong as a specially governed region of China. Their punishment has polarized the increasingly unruly territory between those who want self-determination, if not a total break from Beijing, and loyalists who say that Hong Kong is an inalienable part of the authoritarian People’s Republic.

Sunday’s demonstration was the largest pro-Beijing demonstration in recent years, according to a report by the South China Morning Post. Protesters assembled outside the legislative complex, situated on the harborfront in the heart of Hong Kong, for several hours. Police placed the estimated turnout closer to 28,000. As with most loyalist demonstrations in Hong Kong, participants appeared to be tightly marshaled. Organizers rejected suggestions that they were being paid.

The protest was the latest political flash point in a metropolis that is engaged in an increasingly violent battle of wills with Beijing. When the British returned the former colony to China in 1997, it was bequeathed with a “high degree of autonomy” under a constitutional schema known as “one country, two systems,” but in recent years Beijing has repeatedly asserted its sovereignty.

Tensions came to a head this year, when latent and fringe calls for Hong Kong’s outright independence galvanized into a larger and more coherent political movement. The barred lawmakers Yau and Leung, who cut their political teeth during the pro-democracy Umbrella Revolution protests in 2014, are among the movement’s best-known representatives.

The two have been the subject of political controversy in recent weeks following the delivery of their oaths of office on Oct. 12, when they not only swore fealty to the “Hong Kong Nation” but also used an old Japanese wartime slur to refer to the mainland. Enraged, the Hong Kong government and pro-Beijing lawmakers prevented them from retaking their oaths (and thus taking office) — a gesture that was ratified this week by Beijing itself, which ruled the rebel pair to be ineligible to serve in the positions to which they were elected.

The decision has jarred Hong Kongers, many of whom see the decision as a nail in the coffin of the “one country, two systems” framework. On Nov. 6, thousands of protesters marched to Beijing’s local headquarters, known as the Liaison Office, and attempted to storm a police barricade — prompting the police to utilize pepper spray and their batons. Demonstrators later occupied a nearby intersection.

The pro-Beijing demonstration on Sunday came three days after Chinese President Xi Jinping swore in a speech to crush any separatist forces in the country.

“All activities that intend to divide the country will certainly be firmly opposed by all Chinese people,” Xi said in remarks given at Beijing’s Great Hall of the People, according to the Post. “We will never allow any one, any organization, any party to split off any tract of territory from China anytime, or in any way.”

He was speaking to mark the 150th anniversary of the birth of the Chinese revolutionary figure Sun Yat-sen. Sun is widely admired in Taiwan, a de facto independent nation that Beijing considers a “renegade province.” (Taiwan was founded in 1949 by Chinese nationalists who fled the mainland after losing the Chinese Civil War to the communists in 1949.)

“We are willing to associate with any party, group or individual in Taiwan that … agree that the mainland and Taiwan belong to one China,” Xi said.

Since taking office in 2013, Xi has built a reputation as a strongman with little tolerance for dissent, and he has publicly stayed largely above the fray on the matter of Hong Kong. But it is difficult not to also read his latest comments as a vicious rebuke to Yau, Leung and their cohorts. 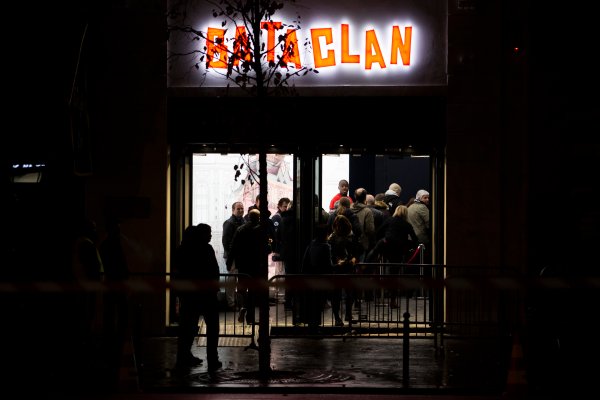 Sting Reopens Bataclan With Moment of Silence
Next Up: Editor's Pick