Trump Praises 'Passion' of Demonstrators After Second Night of Protests

Protests across the U.S. continued for a second day Thursday as thousands of people took to the streets in opposition to President-elect Donald Trump, voicing concern that his administration could do damage to hard-won progress on civil liberties.

The President-elect took to Twitter late Thursday to address the demonstrations in his first public comments on the unrest, tweeting: “Just had a very open and successful presidential election. Now professional protesters, incited by the media, are protesting. Very unfair!”

However, some hours later the President-elect returned to Twitter with a more conciliatory message, praising the “passion for our great country” demonstrated by the “small groups of protestors” and concluding: “We will all come together and be proud!”

In Portland, Ore., police classified an anti-Trump protest there as a riot in an announcement on the department’s verified Twitter account. Police said the move was prompted by “extensive criminal and dangerous behavior.”

Dozens were arrested, the Associated Press reports, as demonstrators broke windows of businesses and started a fire in a trash can. About 4,000 people had amassed in the city, according to AP, chanting slogans including, “we reject the President-elect.”

Security was tight at two of the real estate mogul’s signature high-rise properties in Washington, D.C., and New York City, which became rallying points Wednesday night, in the wake of his surprise defeat of Democratic opponent Hillary Clinton. Protesters approached the site chanting slogans such as “Love trumps hate,” a phrase used by Clinton throughout her campaign.

About 100 mostly young protesters gathered at the White House, where Trump had just concluded his first meeting with outgoing President Barack Obama, and marched to the foot of his newly erected Trump International Hotel on Pennsylvania Avenue, Reuters reports. In New York City, where 15 protesters were arrested Wednesday night, CNN reported that about 5,000 protesters were joined by Lady Gaga at Trump Tower.

On Wednesday, tens of thousands took to the streets in more than a dozen major cities to rally against the President-elect, many chanting “Not my President” and denouncing what they say is racist and misogynistic rhetoric used by his campaign. Protests swelled in Seattle; Pittsburgh; Austin; Dallas; Philadelphia; Portland; Providence, R.I.; Atlanta; St. Paul, Minn., as well as several other cities around the nation and in other countries.

Trump’s critics worry that remarks he has made about Muslims, women and minority groups could provoke intolerance. Many members of the Black Lives Matter movement, a non-violent activist group seeking greater equality in policing, viewed Trump’s election as a major setback. His campaign has drawn support from the Ku Klux Klan and other white-supremacist groups, though he has publicly denied any links to them. His campaign turned down an endorsement from a KKK newspaper earlier this month, stating that Trump “denounces hate in any form.”

In his acceptance speech on Wednesday, Trump vowed to be a President for all Americans, striking a more conciliatory tone than he had in the past. His surprising ascension to power exposed sensitive divisions among America’s diverse communities and a gulf between the media and the public.

“This generation deserves better than Donald Trump,” Lily Morton, a 17-year-old student at Georgetown Day School in Washington, D.C., told Reuters. “The queer people, colored people, women, girls, everyone that is going to be affected by this, we need to protest to help them.”

Wednesday’s demonstrations were largely peaceful, though violence was reported in Oakland, Calif., where some demonstrators reportedly smashed store windows, started fires and clashed with police in riot gear. NBC said that Molotov cocktails were thrown at some 40 fires started. Three police officers were injured and 30 people arrested.

In Los Angeles, hundreds marched to U.S. Route 101 in an attempt to block the freeway.

Trump stunned Americans at home and abroad on Tuesday when he beat opponent Clinton following what has been considered the most polarized and fraught U.S. election in living memory. Clinton was widely expected to clinch the victory and become the first female President in U.S. history.

Throughout the campaign period, Trump came under fierce criticism for his hardline stance on immigration and remarks he has made about both women and minorities. 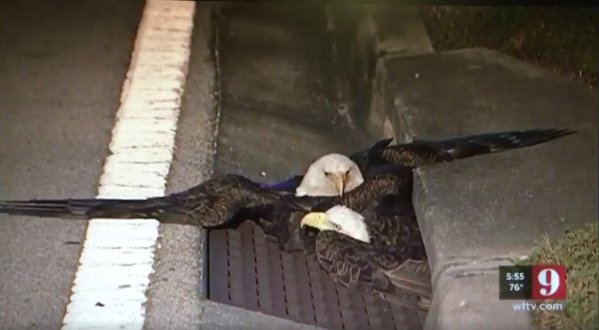