Why So Many Women Abandoned Hillary Clinton

In the final week of Hillary Clinton’s campaign, a group of mostly women formed a secret Facebook group called Pantsuit Nation. It rapidly ballooned by Election Day to nearly three million members. They posted photos of themselves voting in pantsuits to honor Clinton. They organized trips to the polls for those who couldn’t drive or needed childcare. They came out of the closet to their new community of virtual friends as queer or bisexual and talked about the importance of being “stronger together” for their daughters and their sons. Surely, this group was evidence of a surge of women’s support for the potential first female president?

Clinton chose to focus her campaign on women. Her crowds were mostly female; her donors were more than 60 percent female. She made this race about the historic nature of her candidacy. But in focusing so heavily on women, Clinton all but ceded much of the male vote, especially the white male vote, to Trump. And she failed to close her case with key groups of women: Millennials, Latinas and non-college-educated white women.

Clinton herself talked about how she wasn’t a natural politician like her husband and President Obama. She’s never had the moving oratory skills they both possess. This isn’t uncommon amongst female leaders. Margaret Thatcher, Golda Meier, Angela Merkel—all are pragmatists known more for getting things done than for soaring inspiration. Clinton, though, ended up playing the hectoring housewife at times to Bernie Sanders and Donald Trump, lecturing them on their pie-in-the-sky ideas. As one young woman before the New Hampshire primary put it to me: Going to a Hillary rally was like going on a date with an actuary. You knew what she was saying was important, but it was really boring. Young women craved to be swept off their feet: They wanted to join a movement, yet Lady Gaga, Katy Perry and Beyoncé weren’t going to sway them. Overall, Clinton won young voters with 55 percent of the vote, but that’s less than Obama’s 60 percent in 2012, and it’s a safe bet than many of the 7 million voters who stayed home this time were young.

After more than 30 years in the national spotlight, Clinton was also perceived as an elite. And it didn’t help that she ran her campaign as a third Obama term, hoping to piggyback on his popularity with young and minority voters. Exit interviews with Latina voters, who supported Obama to the tune of 76 percent in 2012 but Clinton with only 68 percent in 2016, showed they found her out of touch. In a year defined by anti-establishmentarianism, Obama’s coattails and Clinton’s insider record conspired to turn off enough minority women voters at the margins to make a difference.

Finally, FBI Director James Comey did do some damage when he reopened the investigation into Clinton’s emails. White non-college-educated women had swung away from Trump following the groping allegations. But they swung in record numbers back to Trump after Comey’s announcement and never returned to Clinton even after she was cleared a second time. This group felt Clinton did not represent them and poorly understood their plight. They resented her for believing she was above the law and the bought Trump’s “Crooked Hillary” message. In short, they didn’t trust her enough to be president, and the historic nature of her campaign meant nothing to them. Trump beat Mitt Romney’s already hefty margin of 20 percentage points amongst non-college-educated white women by eight percentage points.

In the wake of Clinton’s loss, Pantsuit Nation has turned into part poster board for sorrows and part organizing tool. Women there are outraged, and they want action. Many are weighing running for office. High school students across the country walked out in protest of Trump’s victory and protests have taken to the streets of Chicago, Boston, New York and other liberal urban meccas. But all this energy and organization comes too late. Where was this passion before?

Abhorrence of Trump failed to drive enough voters to the polls for Clinton. And Clinton’s flawed candidacy failed to inspire enough women—and men—to support her. And so we’re left with this: An angry female electorate with no obvious woman heir apparent and 60 million cracks in a still unbroken glass ceiling. 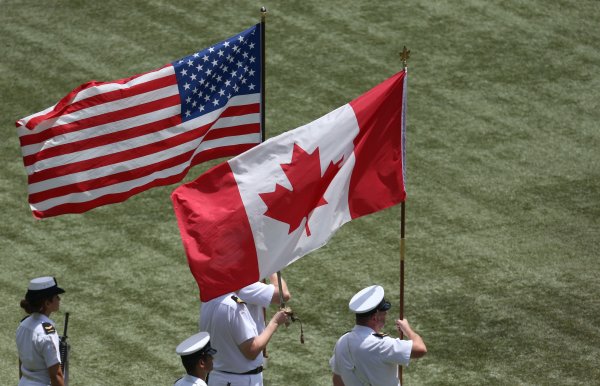 I’m a Canadian and I’m Applying for U.S. Citizenship
Next Up: Editor's Pick