Both men were sunny to the press after the meeting, with Obama saying their discussion was “excellent” and he was feeling “encouraged.” Trump said he “had great respect” for Obama looked forward to his counsel. But the cheery outlook belied years of animosity between them.

Since 2011, Trump was a leader of the birther movement, which claimed that Obama wasn’t born in the United States. Obama mocked him as a lightweight at the White House Correspondents Dinner that year, with a joke that takes on new light now that Trump has won the presidency with no previous political experience. “We all know about your credentials and breadth of experience,” Obama said. “In an episode of ‘Celebrity Apprentice’ — at the steakhouse, the men’s cooking team did not impress the judges from Omaha Steaks. And there was a lot of blame to go around. But you, Mr. Trump, recognized that the real problem was a lack of leadership. And so ultimately, you didn’t blame Lil Jon or Meatloaf. You fired Gary Busey. And these are the kind of decisions that would keep me up at night. Well handled, sir. Well handled.”

All humor was taken out of their contentious relationship when Trump ran for president. On the campaign trail, Trump repeatedly criticized Obama and his policies as a “disaster,” and it wasn’t until September 2016 that he said publicly that he believed Obama was born in the United States (while falsely claiming that it was Hillary Clinton who started that theory in the first place). In the final weeks of the general election Obama painted Trump has a threat to the republic itself. “I always felt as if John McCain and Mitt Romney were basically honorable people,” he said at a rally for Clinton in October. “I always felt as if, push comes to shove, they would do the right thing if they ended up occupying the position of president. I wasn’t concerned about the republic if they had won… Fundamental values are at stake in this election.”

Still, as TIME editors and authors of The Presidents Club Nancy Gibbs and Michael Duffy write, “No matter how personally or politically hostile an outgoing and incoming president may be, once voters have selected a new member of The President’s Club, a different dynamic takes over. Only those who have held the job can understand what it does to you, or the help that you need to succeed at it. And so upon the election of a new president, the sitting president takes the opportunity to pull back the curtain, and give his successor a glimpse of the challenge that lies ahead.”

Despite their years of public feuding, this moment, captured by Associated Press photographer Pablo Martinez Monsivais, was the first time Trump and Obama had ever met. 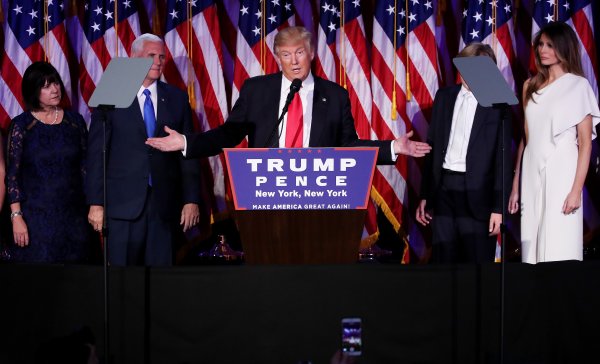 The Nightmare of Donald Trump's Deportation Promise
Next Up: Editor's Pick